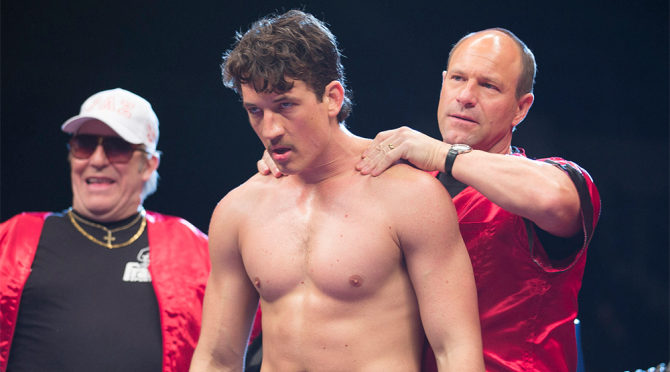 Bleed for This shows its protagonist in an unusual way: wrapped with layers of cellophane, while pedaling furiously on a stationary bicycle and sweating like a broken sink[1]. Soon after, he is weighed in front of a crowd of reporters: he falls into the lightweights’ category by a whisker, so that he can attend the big match for the world title. This is the beginning of the new film by Ben Younger – back to the screen after more than ten years since his last one, Prime – a biographical drama based on the life of Vinny “The Pazmanian Devil” Pazienza, a boxer who actually existed, skillfully performed by the rising star Miles Teller, (Whiplash, The Spectacular Now).

The film follows the canonic plot of rise and fall, but Vinny Pazienza has to overcome more than a failure, before he can regain the long sought-after World Champion Title. In 1988, he loses a crucial fight, ending up in a hospital. While his manager announces to the HBO cameras he should better pull out, Vinny looks for a new coach. Thanks to the guidance of Kevin Rooney, (performed by an unrecognizable Aaron Eckhart, balding and chubby), who also coached Mike Tyson, Vinny will be able to regain the title. This is only the first part, the rise, because the labors of the hero have just begun. When he is involved in a terrible car accident, Vinny finds himself in a hospital again, miraculously alive with his neck fractured. Despite the doctors warning, he submits himself to a long and painful healing process, in order to come back on the ring and protect his title.

Martin Scorsese is the executive producer of the movie even if, except from the story, Ben Younger doesn’t pay many respects to Raging Bull. This movie reminds a lot of The Fighter by David O. Russel, both for the style and the unhealthy attention with which the bad taste of the 80’s is described. Younger skilfully uses the moments of silence but, in more than one occasion, the music stops unexpectedly dropping the viewers in a state of anguished waiting. Anyway, the lack of a soundtrack is balanced out by the noises of despondency made by the whole audience for the next two hours. Younger has no fear in showing pain and the public cannot do anything but helplessly watch while Vinny gets beaten half to death, hospitalized and then forced to wear a halo, some kind of corset of horror that immobilize the boxer’s neck in order to allow its natural healing. When, in the most respectful silence, we hear nothing but the noise of the screws while they are being fastened into the poor guy’s skull to anchor the support to his head, we can do nothing but grind our teeth and hold on to the armchair.

After the success obtained with Whiplash, Miles Teller deals with this role with the same incredible intensity that he showed in Damien Chazelle’s masterpiece, being successful in the difficult challenge of get the public to grow fond of a stubborn, reckless and unstoppable character. The praise of Vinny’s thoughtless determination may result vaguely apologetic. At the end, this is the story of an obstinate boy who wasn’t able to follow his doctors’ and loved ones’ advice, and the director clearly wants to acclaim his diligence, showing how every obstacle can be overcome by one’s willpower. However, if we forget this prude objective, the movie works perfectly: the characters’ psychology is balanced by great scenes of training and matches, thanks to the wise use of editing and of the hand-held camera. Compared to the great boxing classics, Bleed for this is not particularly original but it is an ode to its main character’s skills.