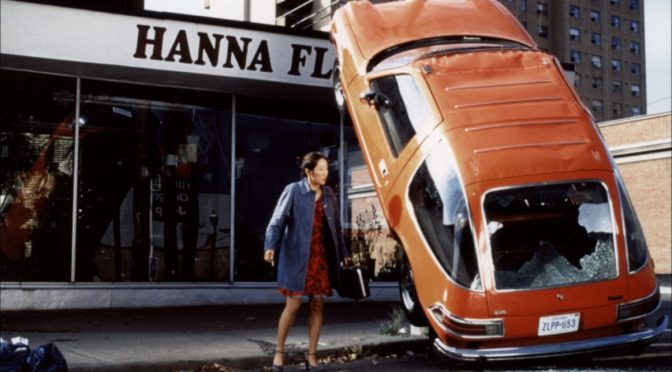 1998 is the year of a couple of apocalyptic films: Armageddon and Deep Impact. In the same year, however, Last Night, Don McKellar’s first full-length film was presented at Cannes and has been introduced in this year’s edition of the Torino Film Festival in the Things to come section.

The countdown to the end of the world has just started and everybody is striving to realise their last wishes or to organise a Christmas dinner with their loved ones. Patrick Wheeler (played by McKellar himself) just wants to be left alone, waiting for the world to end. All is ready and time is running out fast when on Patrick’s last day Sandra arrives (played by Sandra Oh). Love has never been so close and it will not leave him until the end. Sandra and Patrick are wandering in the desperate look for a car, ignoring the truth: instead of being almost over, as they seem to believe, their time has actually just started. None of them has ever been so close to somebody else’s soul. They both feel the need to be together, with their guns loaded but looking straight into each other’s eyes.

“This film is about the hypothetical end of the world, but if I had to shoot it again, I would do it from a much more negative point of view”: these are the words with which McKellar, in Turin, as a member of the Festival jury, describes his work today.

Last Night is part of a series that was assigned to several film-makers in America and McKellar was selected as the candidate running for Canada. The subject, chosen in 1998, was “the catastrophic end of the world” and he tried to tackle it with a bittersweet parody typical of apocalyptic films.

The biting irony is underlined by the cynicism of the scenes where the director, and the insolence of the camera, express the attraction towards the violence hidden in every man. Strong and ironic is the characters’ feeling of confusion when they find themselves living in an upside-down world, with upside-down streets. In a luxurious apartment, a young Callum Keith Rennie (as Craig Zwiller) is trying to satisfy his last erotic dreams, planned according to an estimate of importance that Craig wrote upon the walls of his kitchen. The two family grannies find themselves watching the films of their nephews to conclude that “they don’t know what they are losing, we do”.

We run after the time as real runners and we hold our breath until the end that arrives without any fear. On the contrary, it is bright and full of hope. The catastrophic end of the world and the suicide attempt become a happy ending.

“The film represents my early anxieties, like the sex and the strange feeling of confusion into a changing society”. A film which has showed things that really happened after its production, like the scene where the mother appreciates the outfit of her son. As the director says, when he went back home from Cannes wearing his outfit, his mother told him “this festival really changed you”.