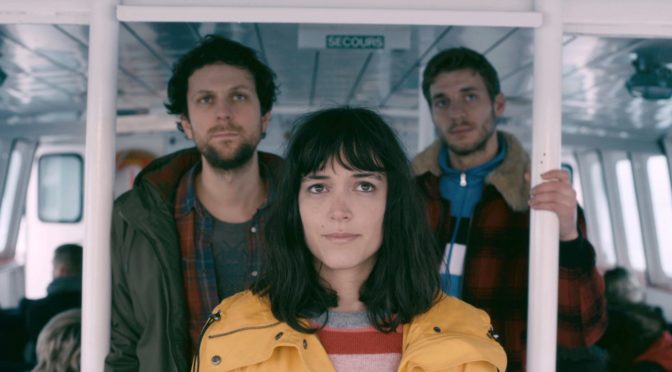 A funny comedy with a bittersweet aftertaste that tells the story of a Wes Anderson-like love triangle, with extravagant implications, but also with the typical French light-comedy. This is the exquisite recipe proposed by Sébastien Betbeder in Marie et les naufragés: a film deliciously unconventional, starting from the comedy to become something more complex. There is a lot of laughing, that is for sure, but the comedy of each situation leads always to a deeper consideration about life and human relationships.

The plot is a common one: two men who competes for the same woman, but this is the only traditional aspect, because the director likes to turn everything upside-down, starting from the narrative process: no voice-over, the characters speak directly to the spectator and reveal their bizarre past in a comical and fabulous synopsis that reminds inevitably of The Fabulous Destiny of Amelie Poulain by Jean-Pierre Jeunet.

Marie is in fact a less eccentric version of Amélie Poulain, but with the same curious eyes that investigate carefully the world surrounding her. She was born on the first day of winter; she has a terrible relationship with the idea of death and a strong influence on both male protagonists. Siméon is a Peter Pan at the mercy of his own life, a kind though absent-minded father who boasts a past of wrong relationships and his tendency to fall in love too easily. Antoine, rejected by Marie after a long love story and suffering from the writer’s block, discovers Siméon’s passion for Marie and, blinded by jealousy, decides to hinder their love. These characters start a funny chase which ends up on the Isle of Groix, from which “when you leave, you’re happy”. The story ends with a weird choreographed dance that, according to the director, represents “a moment of union between the three characters, when a dialogue cannot be done”.

In this movie there’s plenty of room for everything: bold parodies of well-known movies (Paranormal Activities is transformed into the footage of a sleepwalker) and music videos (with the eccentric character of Cosmo), jokes about both doubtful philosophies of life (it seems that one can suffer from “elettrosensibility”) and the tendency to over-romanticise life (as done by Antoine, who in this movie is constantly looking for the perfect plot of his novel).

This extraordinary adventure sets a shipwreck as an allegory of a life that, in the end, is just a series of funny ups and downs, always at the mercy of fate and destined to go on for ever. In fact, the movie ends with Marie’s question: “And now what will happen?”