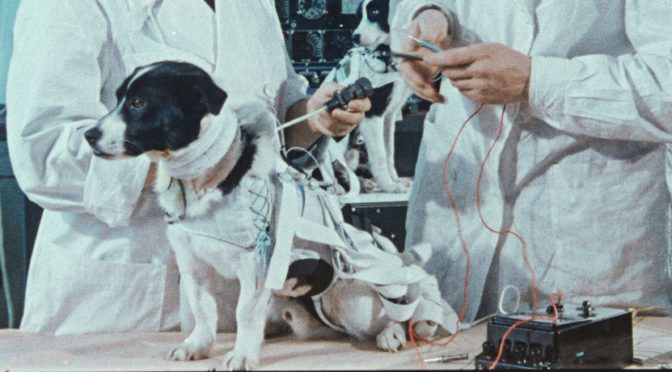 So bold and natural is the mankind’s urge to explore new worlds. It is what features the process of evolution, that depends on the right combination of curiosity, need and audacity: from the first monkey that descended of its tree, up to the first man who walked on the surface of the moon. Nonetheless, if you really want to adventure the unexplored, it is not necessary to be pushed, changing your own point of view is just enough.

This is the simple idea on which Space Dogs by Elsa Kremser and Levin Peter is based, competing in the INTERNAZIONALE.DOC section. Only by watching the streets of the Moscow downtown from the point of view of a dog, you can discover an unknown world, which begins at the end of our own. By employing as a simple expedient the legend of Laika, the alley dog that became the first cosmonaut, as a conjunction point between two separate realities, on one hand the soviet spatial conquest, and on the other the Russian masterless dogs, we are able to see the previously unseen images from the archive of the Soviet Space Program, and the crepuscular atmosphere of these dogs’ lives.

If, on the one hand, we start to feel so much like members of the same pack that we do not get bored from neither the static nor the gruesome scenes we are shown, on the other hand, while acknowledging the cruel preparation these dogs have to go through in order to explore the space, we feel respect rather than pity or empathy, ending up considering them true heroes.

Very interesting were the references to the stories of the other two animals sent to space that, although without appearing extremely relevant to the main storyline, are united and joined coherently by the narrator’s voice in a shared nightmare. Space Dogs is not for dog lovers o for space nerds: not necessarily to be seen as a documentary, nor even as fiction. It is a brutal investigation that, while employing a fairy tale spirit and drawing from a dream-like imagery, has a very precise aim: accompanying the audience from the spatial relics to the derelict downtowns.

And what is the final destination? Just a grim statement: only after trying to put aside our human-centered point of view, we will realize that our legacy will be nothing more than a poisonous morsel.