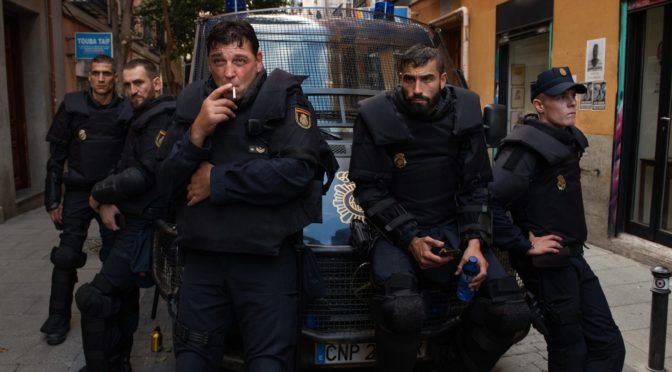 The Spanish tv series Antidisturbios represents those urban conflicts that we have witnessed in this 2020, from the riots of the Black Lives Matters movement, to the months of protest in Byelorussia, to the demonstrations in Poland. All of these were provoked by different reasons, but all defined by strong oppositions and incommunicability between protesters and law enforcements. A distance that remains impossible to fill, even if there seems to be no more air or space between these men and women, even if they merge one into another in agitated movements.

Rodrigo Sorogoyen represents with an almost scientific precision this persistent contact between victims and perpetrators, which change guise with a dizzying speed: this is done through the use of a wide angle lens pressed on the noses, the chins and the heads of the Madrid’s police unit, protagonist of the series, composed by six very different men, which are victims of an eviction that will have a tragic outcome. They find themselves crashed under a new kind of fight, in order to maintain their integrity, even if without any ethic. The only aim is to survive.

As opposed to the Ladj Ly’s acclaimed Les Miserables, the aesthetic of which was based on following shots and wide aerial shots, the city here isn’t shown at all, distances don’t exist and the spectator breathe heavily trying to follow the shooting rhythm. Even the editing doesn’t allow the spectator to breathe, thanks to the use of numerous and quick jump cuts.

Sorogoyen reaffirms his interest for characters with many shades and with their power thrown into crisis, as he has done before in his movie The realm, presented at the Torino Film Festival in 2018; in this case he fragments the narration between many characters thanks to the series format. To the question of the necessity of six episodes about the police forces violence responds the success that this product has obtained on the Spanish television.

According to the Italian audience, this first taste allows to think that the point of view of the story will remain the one of the police unit (their names are used as titles of these first two episodes), but there is still an interest about the role of the commissioner of the Home Affairs that must investigate the inciting accident, as she has been the uncontested protagonist of the first scene of the series, during a difficult Trivial Pursuit game…