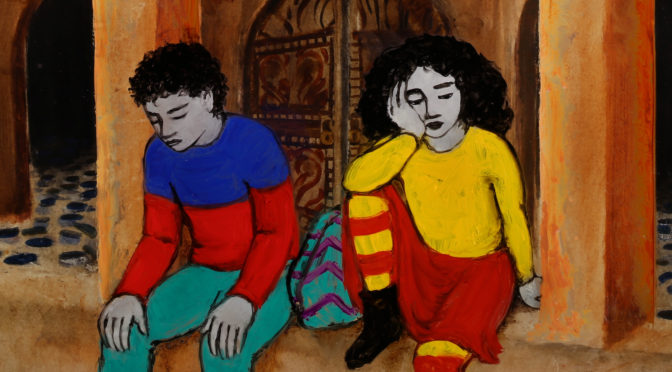 Evanescent and at the same time material, the expressive universe that animator Florence Miailhe gives form to with La traversée succeeds in combining a fairy-tale atmosphere with crude realism, restoring with extreme clarity the strength of a universal and archetypal story, that of those who are forced to abandon their own land and, as exiles, struggle to get somewhere else.

Miailhe’s feature film debut – the only animated film in competition at the TFF39 – begins with a forced escape of the young Kyona and her family. Their village, by now deprived of its bucolic tranquillity, has become a scene of raids, arsons and violence perpetrated by an unspecified armed group against the (imaginary) population of the Yelzid, a symbolic transfiguration of the ethnic cleansing that have occurred throughout history. Like every exodus, theirs is also marked by loss, which leaves Kyona and her little brother Adriel to continue their journey alone across a hostile continent infested with persecution against migrants. Due to the circumstances, they are forced to confront the ugliness of the world at too early of an age, and so the two seem to suffer from an inverted Peter Pan syndrome that, instead of inducing them to take refuge in childhood, deprives them of their light-heartedness and innocence. This leads them to become adults or, at least, to act as such in the face of the humiliation and abuse that is continually inflicted on them. And so here the crossing referred to in the title seems to not only hint to the physical and practical act of crossing places, but also to an emotional passage: the one from childhood to a more mature and conscious age – making La traversée also a classic coming-of-age film, as made clear by the director herself.

The instability and mutability that the story assume are reflected in the dynamism of the images, whose swirling flow recall at times another animated film with dazzling expressive freedom, L’Extraordinaire voyage de Marona (Marona’s Fantastic Tale, Anca Damian, 2019), though the technique employed here represents a unique example in the cinematic sphere, since it is based on an “absolutely pictorial, artistic and artisanal foundation,” as Miailhe points out, obtained by painting directly with oil paint on glass plates, then filmed using stop-motion animation. The unique aesthetic resulting from it finds its intrinsic strength in that oxymoronic combination of evanescent and material, which manages to make the indeterminacy of the stroke coexist with the palpable streaks of painting.

The film then leads us to question the status of the image, which is called into question right from the beginning: the only photographic moment in which drawn hands leaf through Kyona’s notebook, where she has immortalized the faces and landscapes of her life and from which the narration in voice-over of the evoked memories begins. Apart from being a diegetic expedient, the notebook, which risks being stolen and destroyed on several occasions, is the only means that Kyona has to withstand time, thus giving the images the value of testimony.