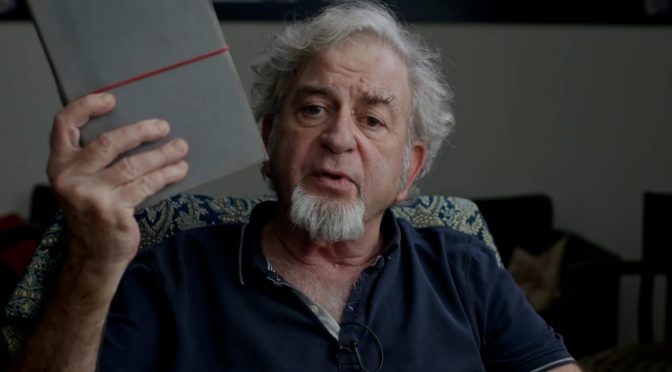 An Abbreviated Manual to Free Cinema from Reality – Avi Mograbi’s Documentarist Forays, the title of Israeli director’s masterclass, is fairly self-explanatory. It closely mirrors the title of his film, The First 54 Years – An Abbreviated Manual for Military Occupation, which has been presented in the TFFDoc / non-competing section, and it mirrors its approach as well.

In both cases the director starts from specific images – the full-length features Z32 (2008) and The First 54 Years in the case of the masterclass and the archive of interviews belonging to the Breaking the Silence association in the case of the film – to be able to push for deeper thoughts in the respective fields, in this case military strategy and documentary films.

Thanks to this empiric process The First 54 Years allows the director to create a manual on military occupation techniques through the observation of multiple testimonies.

In very much the same way the director has used his two films as indisputable examples during the masterclass to show off the various possibilities of reality cinema. Although the two documentaries are based on the same source material, they go in different directions leading to two very different results. Z32 is entirely based on a war veteran’s ponderings about the actions he has committed throughout his military service. The First 54 Years, on the other hand, refuses any possibility of elaborating trauma, focusing instead on witnesses’ tales which expose facts and mechanisms regarding the Israeli occupation. As previously mentioned, the source material for both documentaries is made up of soldiers’ testimonies which have been collected by Breaking the Silence, an association founded by Mograbi himself with the aim of telling the story and the brutality of the Israeli occupation of Palestine and to keep alive those memories which governments from 1967 onwards have attempted to erase.

Z32 was created with the idea of making a fairly straightforward film telling the story of a soldier who regrets having taken part in a retaliatory action against Palestinian policemen. The possibility of making a movie centered around the emotions and thoughts of the soldier is hampered by the fact that the man does not want his face to be shown. This was solved thanks to the director’s intuition to cover the soldier’s face with a 3D digital mask which still left his eyes and mouth visible, thus enabling him to show his emotions. This solution notwithstanding, the veteran still found it hard to express himself freely. Mograbi then decided to give the soldier a camera, to allow him to autonomously reflect upon his actions. At this time the man’s girlfriend becomes a relevant figure, given that she takes part in the soldier’s ponderings and opposing his attempts to absolve himself. At the same time, the director is questioning the moral dilemmas surrounding his film: is it fair to hide a murderer inside one’s work? It is fair to exploit his story? These thoughts are told by the director via songs, almost as if the musical were a mask used to filter his reflections, similarly to what happens to the protagonist.

The First 54 Years moves in a different direction. In this case Mograbi uses a number of testimonies from Breaking the Silence’s archives, in order to make a film made up of a series of interviews. Mograbi focuses here on tales of actions, procedures, orders and mechanisms of Israeli military operations in Palestina, leading the viewer like a military tactics expert. The director, like a modern Machiavelli, recites passages of an imaginary military occupation manual which uses the Israeli case – from the 1967 West Bank occupation to the first and second Intifadas – as an examples to prove its points. These are harsh words which contrast strongly with Mograbi as a person, in a powerful attack towards the Israeli state confirming, once again, the director’s ability to question reality, internalize it and decline it in different ways – ironically, cinically, experimentally – which are always functional to a critical analysis of the world.