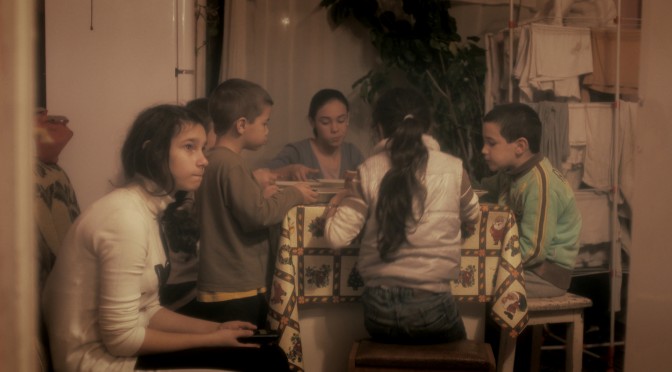 Bacau – Turin: a distance that keeps seven children apart from their mother, who works as a caregiver in Piedmont and will go back to Romania only in summer.

Georgiana is the oldest daughter, who takes care of her younger siblings and does the housework. Their days pass in a typical way for children their age: they wake up, get dressed, and someone always cooks dinner for them. However, a fifteen-year-old girl forced to grow up too soon is the one doing all of his. The mother’s phone call is punctual and she wants to talk to all of her children, from the youngest to the oldest, but she cannot stay long on the line because she needs to go back to work. She tries to fix this by sending them the awaited package from Italy, and the children wonder if their mum remembered to buy that desired toy. However, since she did not receive her pay slip, it contains only candies, snacks, and a present for Georgiana’s fifteenth birthday. “The next package will be for your birthday, this time is for Georgiana”, says their mother. It is a life of games for the youngest children and of washing machines, dinners and lunches for the oldest. When a baby tooth is lost, when the candles are blown, with a word on the phone, the wish is always the same “I hope that mum will come back soon 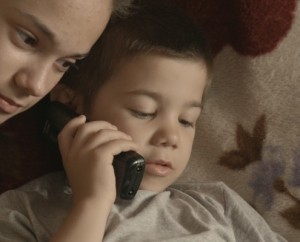 Even if the first shots are cold and snowy, the air you breathe in that house is positive and warm. Georgiana’s figure is the most relevant, as she immediately gets into the role of the homemaker and the mother, though ironically she says, “I will never have children”. She is able to keep some moments for herself, from the Argentine soap opera to a night with friends, even though every time weeping or caprices interrupt her. The viewer gets used to the idea of considering Georgiana a grown-up woman, but then realizes, almost with a smile, that she is a teenager worried about her first date, (for example, when she is looking for her foundation and bobby pins). You forget you are watching a documentary and that someone else is in that house. The film director, Teodora Ana Mihai, is accompanied by four Belgian operators, who enter tiptoe in the social housing condo in the outskirts of Bacau. Only the film director knows Romanian and whispers to the camera operators, explaining the various scenarios. Sometimes the international language of games and feelings is the one that overcomes: the languages are not an obstacle anymore. Five moments of shooting in nine months and more than 150 hours of shot film. They could have filmed more, dug deeper, but the respect for this young family’s privacy is huge.

The question is instinctive at the interview after the show: “where is the male figure?” As you can see in the documentary, in the Romanian domestic hierarchy the woman is in charge. In-fact, Ionut, the 17-year-old brother, is invisible, as he spends his days playing video games. The father has vanished after an ugly divorce, not sharing family moments anymore and it is not even named. The film director does not care about the life of this man: his absence demonstrates how alone the children are.

It is an intimate and delicate work, which speaks for itself and acquires even more weight after the confession made by the film director during the presentation of the film: “I was born in Romania during the communist period; when I was seven and a half, my parents left and found asylum in Belgium. To ensure the secret services that they would go back to their homeland, they left me in Romania”. Even though they came back after just one year, this experience marked Teodora Ana Mihai. History repeats itself and with this work, she wants to give voice not only to those who emigrate from their homeland, but also to those who are forced, like her, to remain in their homeland suffering the consequences.