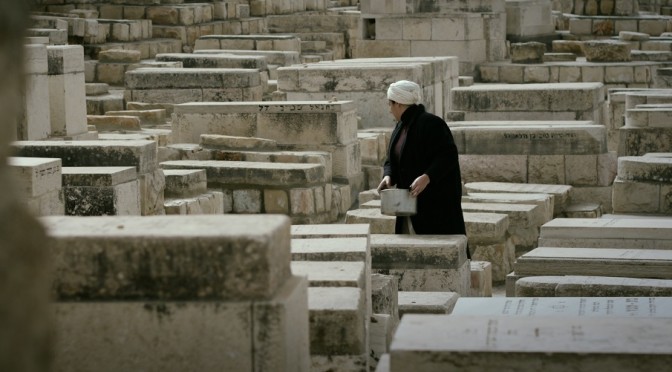 According to biblical tradition, The Mount of Olives represents the place where God will bring the dead back to life on Judgment Day. Cliffs and rocks outline a landscape full of paths both winding and labyrinthine, each of them studded with an unknown number of tombstones. A house built into a rock wall separates the world of the dead from the living. Tzvia (played by Shani Klein) lives in this spiritual and transcendental place. She is the protagonist of Mountain, the new film by Yaelle Kayam, which was presented for the first time this year in the “Orizzonti” section of the 72nd annual Venice International Film Festival. This feature film tells the story of a Jewish woman waiting for any signs of love coming from her husband. The routine of Tzvia is always the same: she does housekeeping and walks in poetic landscapes among millions of burial recesses. While Tzvia waits for the love and attention of Reuven, her husband, she begins to wander in the area around her house at night. Thus, she discovers that some erotomaniacs meet to consummate decadent copulations with each other, when the sun goes down. At the beginning, she hides herself among the tombstones and watches, with a voyeuristic attitude, the merging of the bodies during sexual intercourse. The Jewish woman discovers the meaning of sexual liberty and makes a comparison between that attitude and her unsatisfying life with her husband. Tzvia is still hidden and she does not know how to escape the situation. When the erotomaniacs become aware of the presence of the woman, Tzivia reduces herself to a servile condition. She feels a sense of guilt, so she decides to offer a meal to the group of exibitionists every night from now on. The film exudes the philosophy of Bataille and sacredness becomes seminal. Mountain presents images full of symbolism. For example, the scene in which Tzvia touches a used condom clearly indicates that she is a sexually repressed woman, while the image of the dead mouse lying on the floor reveals in advance the tragic ending of the film. To summarize, this work by Kayam is nebulous and fails to emerge. Still, there are some interesting – but half-developed – ideas. They float in the air just like Tzvia’s sexual desires do. Who knows if love will crush sense of duty once again.