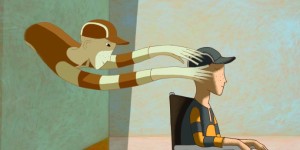 Phantom Boy is an animated film that tells the story of a child suffering from leukemia, who discovers that he can float free of his body and fly like a phantom. As none can see him, Leo flies through the hospital walls, and wanders freely around the city of New York.

During his treatments, Leo meets Alex, a police officer injured during a chase, who is now confined to a wheelchair. Leo, who dreams about becoming a police officer, offers his help to Alex and try to find the man with the broken face who is spreading a computer virus, in order to take control of the city. The reporter Mary, Alex’s friend, thinks she’s alone in the manhunt, as she doesn’t know that Leo is on her side, protecting her just like a guardian angel. 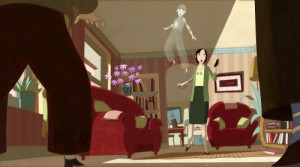 This is the second animated film after A Cat in Paris (2010) by Jean-Loup Felicioni and Alain Gagnol. The film tackles subjects such as illnesses, childhood and bravery. A serious disease affects an eleven-year-old child upsetting his boyhood, the most beautiful period in life. However, his courage is the element that stands out in the film: Leo decides to help Alex and Mary with their investigation, at the extent he sacrifices himself for their sake. He proves to be brave facing his illness and, at the end of the film, when he decides to stay with Mary even if it might preclude him the chance to rejoin with his material body.