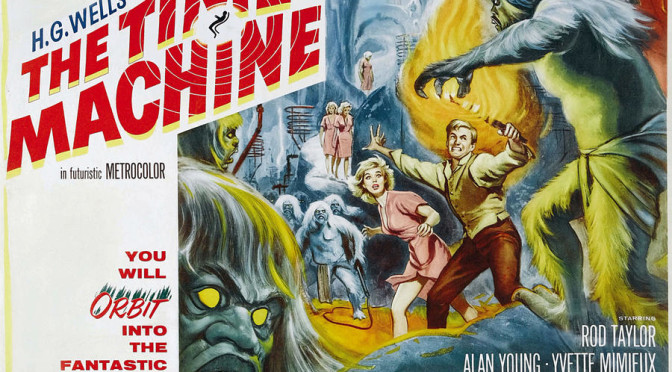 London, 1899. George is a brilliant inventor who developed an amazing machine enabling a person to travel in time. And with this machine, the protagonist starts to explore the future and witnesses the progress also the failure of humanity (two, even three world wars). His route will take him 800.000 years ahead, to a future where humanity is divided between angelic and naive Eloi from the external world and cruel and monstrous Morlocks, the inhabitants of the Earth.

George Pal depicts a story in his film based on amazing novel of H. G. Wells who invented an imaginary world, reflecting very well the sci-fi of that period. Colorful pop culture does not take it very seriously, and the fierce social critique of the novel which is that the Eloi represent the rich and Victorian middle class while the Marlocks represent the working class, gives a visionary image to whom made The Time Machine precious like a jewel.

By a sort of anthology of first time lapse experiment, time travel is shown us through the season changes and the changes in fashion in time. It also shows us the history of Time Machine which is the ancestor of Delorean, an armchair with commands operated by a lever with a knob in diamond (to the limits between Steam-Punk and Trash).

Perhaps one of the last examples of Cinema of Attractions in the historical sense of the term, is the film watched all over the years and still enjoyable and fun in its vintage style. We owe to George Pal fantastic 60s cinema (especially Barbarella). However, his spiritual students such as George Lucas and Steven Spielberg can not be forgotten as well. By the way, a remake of the film in 2002 (which was unsuccessful at the box office) is directed by great-grandson of Wells, Simon who used a lot the original version on his remake film with Guy Pearce in the lead role and Jeremy Irons, the head of Morlocks.

“Roads? Where we’re going we don’t need roads”, says Doc Brown in Back To The Future. We agree with you Doc. To travel, it is enough to sit on a comfortable armchair and to use healthy, vital and a lot of immagination.