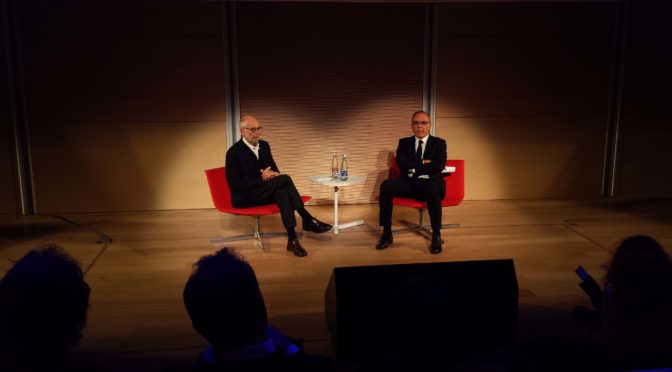 “I wanted to be a musician but since I wasn’t fast enough as a guitarist, I dedicated myself to the cinema”. Clever as always, Gabriele Salvatores introduces himself with these words at the event held on Monday 21st of November, entitled A talk about cinema and music.

In the suggestive location of the Intesa Sanpaolo Skycraper’s auditorium, we attend a very interesting conversation between the guest director of this TFF’s edition and Alberto Barbera, director of the Cinema National Museum. The meeting unravels as a chat between friends who love cinema, and this set up is widely appreciated by the audience in the room.

Salvatores talks about how his juvenile passion for music had later influenced his whole path as a director. In fact, his first works were musicals, even if “only my parents and one of my two sisters saw them. My other sister didn’t want to”. From then on this passion accompanies him on every set, where he always works with a musical background. “At first the crew is confused by working while listening to music, but then they are the ones who ask me to play it.  Everybody follows the rhythm when there is music going along with the shootings: actors, extras, camera movements. Everything is in perfect harmony”.

Sequences taken from Salvatores’ movies – perfectly edited, in order to emphasize the masterful use of his soundtracks – plays along with the talk. The director is moved while watching his works again and lets himself go with stories about the filmmaking process. For instance, when – during the editing of Marrakech Express (1989), in the very well-known scene of the soccer game Italy-Morocco – he realized how the song La leva calcistica della classe ’68 could be the only perfect match. Since the production could not afford the author’s rights, Salvatores himself called Francesco De Gregori. The songwriter granted them and, afterwards, was very satisfied with the result.

At last, Salvatores talks about music and film, about feminine and masculine. According to him, music has a feminine soul, because it is ready to welcome, while film is more violently masculine.
Beethoven’s “Moonlight Sonata” evokes in all of us a nocturne picture, indeed, but which one exactly? A mountain? A lake? Or a house? The music allows to the listener the possibility to associate it with any image and welcomes any emotion that he/she is willing to offer. The film, instead, encases and limits within the picture, leading the spectator along with an intended path.