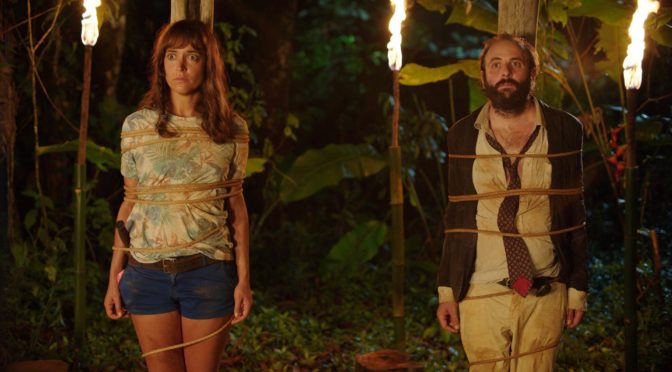 In my experience as spectator, in general, French films are either really serious or not serious at all (in both cases in a positive way, according to my point of view). La loi de la jungle belongs to the second category, not only because it is a really funny screwball comedy (and more), but also because it becomes really parodistic and satiric to a world, the one of the political and economic European laws, that is extremely bureaucratic, absurd and crazy, without any touch with reality.

Marc Chȃtaigne (Vincent Macaigne) is an awkward intern who is given an ungrateful job by the Ministère de la Norme: he is sent to Guyana, a country under the French control in South America, to supervise the building site of the GUYANEIGE project, an ultramodern ski resort (also financed by a Swiss sport bank, by Qatar and by Japaneses), that has to be built in the middle of swamps. It should also attract tourism to those exotic places. This is the moment when it starts to be clear that the situation is getting more and more absurd, especially thanks to the fact that the poor Chȃtaigne is persecuted by an odd IRS agent who keeps confusing him for a person of his own name, dead and buried, and who follows him until South America. Once he has reached his destination, with the precious rule code in hand, Chȃtaigne meets Galgaric (Mathieu Amalric), the authority that represents the government of Guyana (and who may recall the character of “Cetto La Qualunque” to the Italian audience), and his young, pretty and “wild” colleague nicknamed Tarzan (Vimala Pons). Her name says it all and she will be designated to escort him around the jungle, among tarantulas, insects and snakes which are always around the corner. 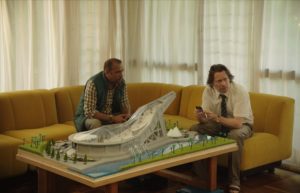 It would be impossible to describe all of the hilarious scenes that sprinkle Peretjatko’s ninety-nine minute film and that maybe, at least in the last part, tend to be a bit exaggerate and surreal. During the film you will laugh but in the end you will also be under the impression of having reflected on the absurd projects that the man has against the environment (there is also a reference to the construction of the high-speed rail line) and, therefore, on the absurdity of man himself. Another important theme regards the struggles of the young trainee who has to face a world made up of rules, bans and shortcuts. This goes on until the end, when the Guyaneige project is canceled and Chȃtaigne is informed by the powerful man of the time that he will now have to go on an island in Greenland, this time, to build a swamp! I will not add anything else, but just know that Peretjatko will, in the end, surprise us with a happy ending. The craziest human project of all: love.