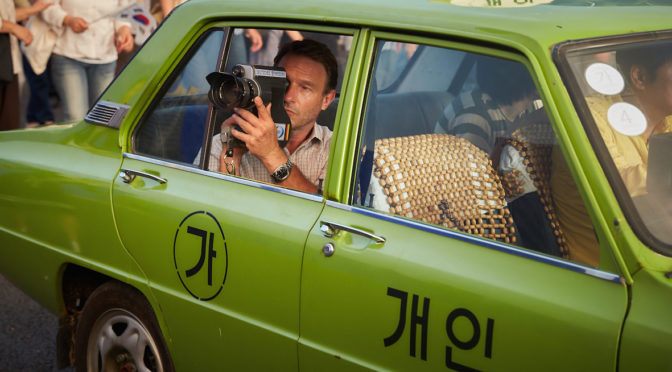 May 17th, 1980. The coup d’état of general Chun Doo-hwan leaves no hope for democracy in the South Korean people. The military regime imposes martial law from the very beginning, and it hides behind a wall of censorship and misinformation. The population of the small town of Gwuangju, encouraged by student demonstrations, takes to the streets, loudly demanding for freedom. However, the government responds with violence, opening fire on civilians, killing dozens of people and injuring hundreds. Journalist Jürgen Hintzpeter (Thomas Kretschmann) manages to record these riots on his camera and, helped by taxi driver Kim Man-seob (Song Kang-ho), succeeds in catching the world’s eye and let everyone know what is happening in South Korea. 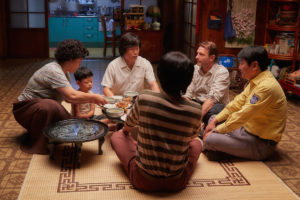 Director Hoon Jang narrates one of his country’s historic events through the lens of comedy, focusing on a main character who is awkward and clumsy. The taxi driver, played by Song Kang-ho, is an ordinary man, a loser that embarks on a great adventure motivated by his need to pay the rent; but he is also a good man, who cannot refuse to do something in times of need. By his side, is german journalist Jürgen Hintzpeter, who decides to report the tyranny of the military, becoming a beacon of hope for the people he meets. Some buddy movie tropes can be found: the odd couple; the initial dislike between the character that turn into friendship in the end; being rescued last-minute by the companion. Highlighting the differences between the two characters is also the different approach to acting of the two main actors: Thomas Kretschmann is serious and quiet, while Kang-ho is impulsive and dynamic. He is the driving force of the story, and he is capable of making us laugh with his facial expression and over-the-top acting, but also move us in the most intense moments of the movie. From the very beginning, Jürgen and Kim are two sides of the same coin: they start the adventure mainly for economic reasons (it will be the journalist himself to admitit it while answering the question “Why did you  choose to be a reporter?”), but they are also both shocked by what they see and they get a strong connection with the people and students of Gwuangjiu.

It seems like the director’s intention is to tell us that history is not made by generals, but by simple people and by daily acts of courage and support.  That’s why we don’t see any scenes with military leaders, or any scenes related to the policy-making that caused the situation. The movie manages to build a dramatic climax by shifting from comedic scenes to more intense ones, concerning the rebellion. These scenes are underlined by the use of a hand-held camera, which gives a sense of chaos and rapidity, giving us  the impression of seeing  through the reporter’s camera.  The movie ends with a message from the real Jürgen Hintzpeter, who talks to the audience telling them he wishes to meet his friend, the taxi driver, again. An ending that reconnects the events told by a great production to the real events that occurred in May 1980.