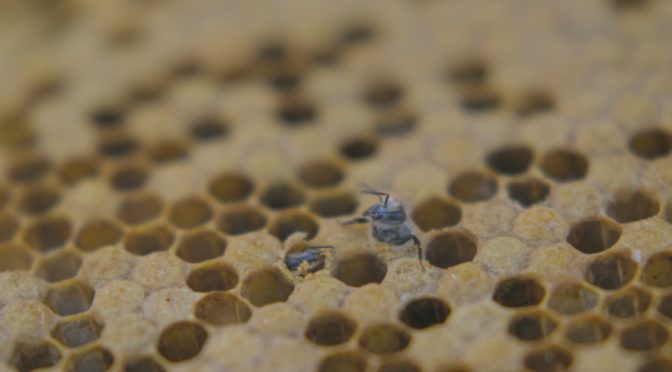 Hawaii is a beautiful and dramatic microcosm: the economy of the island is based on millionaire incomes that come from tourism. But inland, far from beaches the villages for vacationers, indigenous people face their dependencies on the “resources”, while the islanders fight battles for the survival of all of us.

It is morning, sun has just arisen. Manu is sleeping, and she really doesn’t want to get up. Her father is an indigenous of the island and he fights on the peaks of Mauna Kea, the huge sacred mountain. Here he opposes to the construction of a big telescope. Whereas, her mother and Manu deal with bees: they observe them, they study them, they move them, they save them, they collect and use their honey, they envy their spirit of solidarity, and they try to understand if they are the actual survivors, being apparently weak and exposed to climate change.

In the meantime, a group of NASA scholars try to simulate life far from Earth, they use a programme that isolates them from the rest of the civilization. For six months, they are living in a place that reconstructs living conditions similar to those of Mars.

Sarah Christman directs her first full-length film, presented in the section International.doc: a modern and lyric work, a documentary that evokes the survival of the species as a fundamental and ancestral instinct, which resolves into migration. The isle of Hawaii is certainly the best location to face these themes: Christman’s eye disappears among the lives of her protagonists that she observes by hiding herself, by spying the bees and their maniacal industriousness. She searches the geometric naturalness of their combs, then her eye rises, it almost flies beyond the snow-covered peaks of the sacred Mauna Kea, and then it sinks into the bowels of the Pacific, into the primordial soup, where life once happened. This image is wonderfully revived by the lava that evaporates, sinks, spreads and petrifies when it touches the ocean.

Sarah’s journey actually becomes the journey of life, which is able to tell how life adapts and how it always tries to find new ways to continue its own story, our story. The director adopts a deep and concrete style, humble and respectful towards a country so rich in contradictions. She draws an interesting parallel: when the bees swarm, the colony reproduces like a cell, by splitting itself in two parts. One half of the beehive flies in the search of a new home, while the other half stays behind. Is there a future for humanity on Earth, or is it necessary to put our survival at stake trying to migrate on another planet?