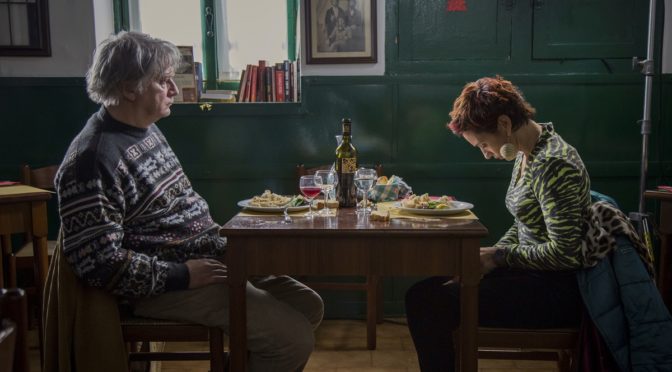 Born and raised in the suburbs of Naples, Maria (Teresa Saponangelo) is orphaned of her father even before coming into the world. She lost him because of a gunshot by the brigadier Guido Mandelli (Tommaso Ragno), who will see the young woman knocking on his door in search of answers, once he has served his sentence in prison. With Il buco in testa, presented out of competition at the Torino Film Festival, Antonio Capuano dedicates a new chapter to his Naples, the unaware theater of adrift lives.

Torre del Greco and Milan are not only two cities but also the only points of reference in a narrative canvas that crosses two temporal plans: the long flashback is entirely set in the Campania suburbs, between the degradation of the environments and its citizens forgotten by a collapsing system; the present is hosted by the great Lombard metropolis, by its oppressive skyscrapers and the streets full of people who tend to relive a trauma that has never been overcome. The clash between the Brigate Rosse and the police recalled by Guido is almost a separate chapter, a visual break, shot in black and white. The director adds a pictorial note to the sequence, as he himself admitted, which will linger throughout the film: the red color, like the blood gushed in the Anni di Piombo.

With this complex construction, a strong and malleable key was needed to keep everything balanced. Capuano gives this task to Teresa Saponangelo, already directed in Polvere di Napoli (2000), who carries the weight and the pain of an incomplete woman on her shoulders and body. The camera follows her throughout the film, not sparing her merciless close-ups, undressing her to the point of giving us back every variation of her state of mind in perpetual conflict. The final split will take place when she decides to leave and go to face the man to whom she can finally give a face after years of hatred. In a mirror image, Maria changes hers: having abandoned her old hairstyle and high-heeled shoes, this woman who arrives in Milan has short hair and dyed red (again the red color), she wears a punk outfit and she is ready for anything to get justice. Perhaps even to kill.

The train serves as tutelary name of the entire film. Not only for the homage to Lumière brothers, immediately revealed at the first shot. Even if only with a whistle, the train enters the scene whenever Maria feels suffocated by her life. As if it wants to suggest that she should shove off, go away, run away to fill that void, that hole, that she feels in her heart. Or in her head.