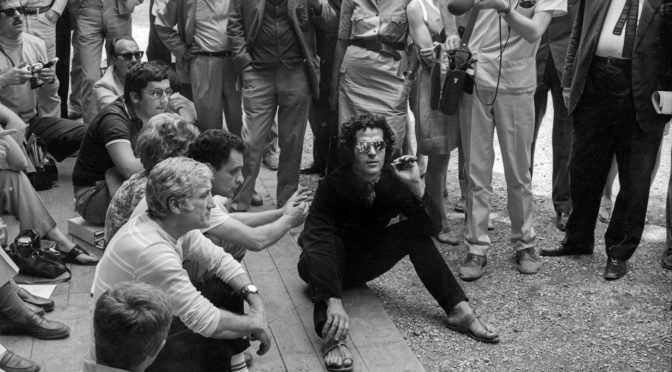 “Pino” is the title of the documentary made by Walter Fasano for the historical acquisition of one of the most significant works by Pino Pascali, by the Museum of contemporary art dedicated to the artist in Polignano a Mare, where he was born. A title that manages to convey the vibrating and overflowing soul of an artist who has deeply marked italian post-war art. This particular piece “Cinque bachi da setola e un bozzolo” (1968) finally returns “home” from Rome in 2018 in a story told through photographs that takes inspiration from “La Jetée” by Christ Marker.

Young Pino, in the prime of his career, tragically dies due to a motorcycle accident in 1968. His last meaningful creative period is presented to us through the photographs taken by Elisabetta Catalano, Claudio Abate, Ugo Mulas and Marcello Colitti. The story focuses on past and present that blend together: through the photographs and the videos from the Sixties, the extraordinary shots by Pino Pascali and those taken nowadays by Pino Musi, the story manages to elude the domain of time. Just like the sounds are recorded today and then “aged” as if they’re discoveries from the past.

The story is cleverly told by Suzanne Vega, Alma Jodorowsky and Monica Guerritore: their voices give ulterior strength to the images, while still conveying the merging of past and present. All the elements are in such harmony that the story isn’t just made by each single one of them but by their union. The result turns out to be perfectly fluid, even more thanks to the compelling effect of black and white. An outstanding example is the parallel editing between the drill that opens the crates which contains the artwork, and Pino who “is born” from the sand and arises while the drilling noises resonate: the return of the piece to Polignano a Mare is like a second birth, as if coming to life again after fifty years, a resurrection of the artist.

Reporting the acquisition of the artwork by the Museo Pascali, the director Walter Fasano aims to “broaden the horizons of the story and try to evoke ‘other’ possible meanings”. The intent is clear and the result proves to be successful: what could have been just a simple reporting of facts, becomes a multidimensional work that delves deeply into the artist’s soul, who prematurely died, and manages to celebrate him appropriately.

Just like Pino Pascali’s art and personality, the documentary is neatly chaotic, giving space to solemn deep thinking as well as a multidirectional stimulation among the most whimsical. Knowing Pino’s soul through the film, there is no doubt that he would have certainly appreciated it.