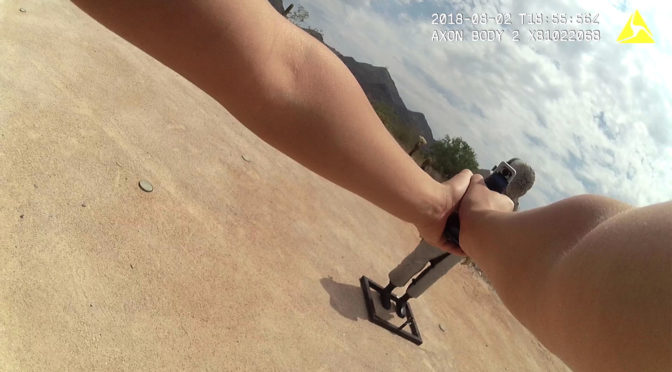 One eye turns to the camera. The camera enters to examine the optic nerve from which the connections to the brain branch off, while the cold, unaffected voice-over explains how it is responsible for reconstructing the data received. However, the reconstruction is never impartial. It’s always influenced by the cultural structures in which we are immersed. The opening sequence of All Light, Everywhere immediately reveals the intention behind the visual essay directed by Theo Anthony: to overturn the dialectic between observer and observed. At the same time it demonstrates how, historically, it has been concealed by observers to hide the connection between dialectics and the management of power.

The act of viewing is an exercise of power, and the film investigates this nature of the gaze by seeking its historical concretisation through the union of surveillance and militarisation. The Axon Enterprise headquarter is one of the places where this marriage takes place on a daily basis. Anthony takes us inside, guided by the company’s CEO. All the contradictions of the neo-liberal and falsely libertarian narrative we are presented with immediately emerge. Portrayed as a place of total freedom, Axon’s headquarter instead has clearly the structure of the Foucauldian panopticon. This structure of surveillance and punishment reflects the company’s production. Axon, famous for inventing the teaser, has at the same time among its flagship products the body-cam, an integrated video camera used by the American police during their patrols. Camera and teaser are ramifications of the same political body that creates a structure of control and vision in which the point of view remains hidden. Therefore, what happens in front of the camera is not filmed impartially, but is a representation constructed through the perspective of this specific body.

Anthony also continues to reflect on the impartiality of the image through two cornerstones of his cinema: a focus on scientific experimentation and historical analysis. As in his first feature film Rat Film, in All Light, Everywhere the director analyses the dynamics of the gaze through some modern neuroscientific experiments, but above all by examining the evolution of the historical relationship between photography, power and weapons. A paradigmatic example is Marey’s rifle. The alienating voice-over, another typical element of Anthony’s cinema, narrates how one of the basic inventions of cinema comes from a weapon and, above all, how its birth is rooted in the colonialist history of France. Many of Marey’s photographic studies were in fact ethnographic observations of colonised African populations. All Light, Everywhere thus also becomes a self-reflection on cinema and on how cultural influences condition the personal perception of things and images.

Fragmenting all these narrative lines, to which is also added the encounter between Anthony’s gaze and the African-American community of Baltimore ‒ though without expressing a clear-cut judicial standpoint ‒ All Light, Everywhere is a highly political film: as argued by Donna Haraway, whose quotation from The Persistence of Vision opens the second chapter, highlighting the power underlying the structures of vision is the first step towards showing their unnatural behaviour and subsequently overturning them.