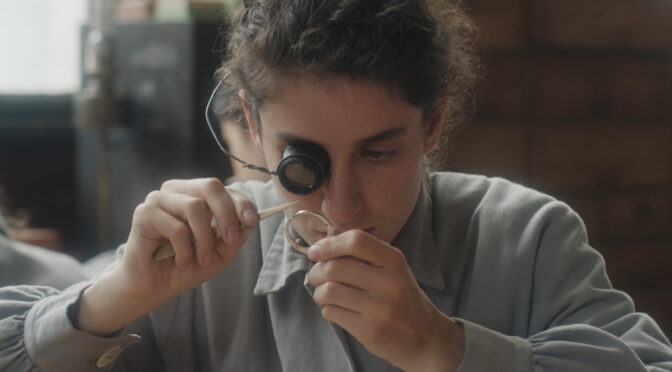 “After spending a few weeks with the watchmakers, my views on socialism were resolved: I was an anarchist.” With this sentence by Pyotr Kropotkin extracted from his Memoirs of a Revolutionary (1877), director Cyril Schäublin decided to start his second feature film ‘Unrest’ in which, by reconstructing the events of 1870, he recounts how the independence of thought of the artisans in the Jura Mountains ignited the spark for the birth of the international anarchist movement.

The watchmaking industry at the end of the 19th century imposed even more rigid production rhythms: the magic of craftsmanship gave way to a working-class frenzy in which seconds were precious, especially when they were useful to produce the objects that allowed to scan them precisely. Yet, in Switzerland, time is not the same for everyone: four rhythms punctuate the lives of its inhabitants, a gap of a few minutes that determines a considerable difference in salaries. The film offers a restless dialogue that interweaves the birth of a tireless production machine with the strands of social resistance that tries to annihilate it in fear of dangerous economic tyranny, seeking an alternative to statist propaganda. On the one hand, therefore, the need for a coordinated control of time, both material (marked by clocks) and historical (as a physical phenomenon) and on the other, the development of an anti-authoritarian revolutionary thought inspired by the great ideals of equality of the Paris Commune and the winning war strategies of the Battle of Morat.

Descended from a family of watchmakers, Cyril Schäublin gift us with a film that is personal and intimate in its inspiration, but universal in its development, which also contains a reflection on the way we define (and rewrite) our history to better express present time. In his formal approach made of long shots with fixed focus and figures on the margins, Schäublin creates an internal coherence of solid integrity, attentive both to the harmony of colours and to the whispers of the multitude of voices organising to subvert power and trace a new ‘anarchist map’. Everything is already encapsulated in the title, Unrest, which refers to the unrest wheel, the way the female factory workers called the barbell used to beat seconds in mechanical watches, but also refers to the disequilibrium and restlessness in which Switzerland finds itself. Dominating the film is an oppressive quietness, a gentle but imposing violence that leaves the factory workers no chance. That ‘mechanical heart’ beating inside the watches produced by the world’s most famous manufacture thus refers to none other than the very heart of the international anarchist movement, whose nerve centre lies in the Jura Federation and its revolutionary watchmakers.