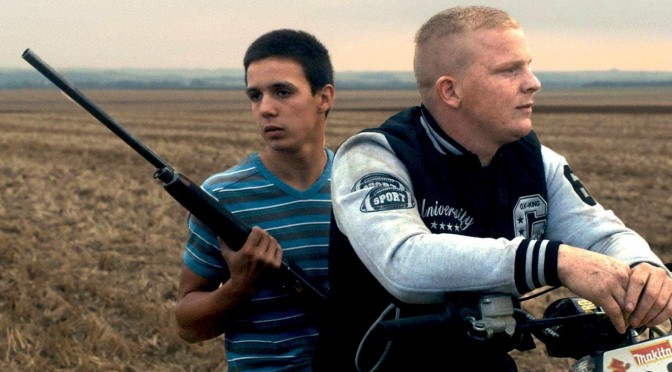 Mange tes morts is the worst insult one can ever say to a gipsy, and it is also the title of the new work by Jean-Charles Hue. This director took part in the 2009 Torino Film Festival with Carne Viva, a portrait of Tijuana reality.

This full-length film by Hue is a story of formation that in the end becomes a road movie with existentialism features. At the beginning, the film is a documentary set in the Jenisch gipsy community. The story, which may seem too simple, consists in a journey among the “gadjo” (not gipsy people) to steal a load of copper.

The French director shot a film based on the Hamletic doubt spread among Jenisch people: the choice between baptism and the consequent submission to the atavistic Christian morals or the choice to take up a career as a master thief.

The main character Jason Dorkel – a 21st century Hamlet in Nikes – chooses the first option. But Fred, Jason’s stepbrother, compromises the calm of the community. After fifteen years of jail he comes back into the Jenisch community without changing his behaviour: he is still a criminal.

Zvyagintsev was right: the return is the most ferocious butchery of the conscience. Fred is like evil that sodomises the weakest people and leads Jason to his ruin. Until then, he was depicted as a lamb doomed to hellfire.

From now on, the film becomes less united than the first part. There are a number of surreal scenes, like the one in which Fred bravely challenges police officers that seem bored psychologists ready to listen to their patients’ troubles. Actors pretend a solemnity that does not pertain to them and often improvise in an unexpected way. Mange tes morts is a nice film but it is also defective, it is interesting but also far from being a masterpiece.