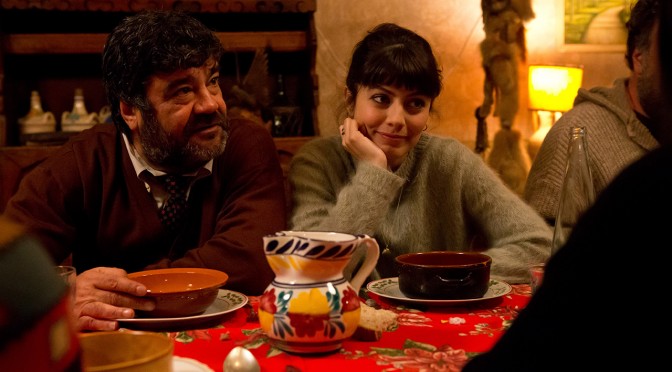 The traditional idea of Christmas as a day of meeting with your own partner’s family has already been used and abused. However, the originality added by the authors of Boris (a famous Italian tv series), Giacomo Ciarrapico, Mattia Torre, and Luca Vendruscolo, is the vision of Christmas as a celebration of darkness, doomed to end in tragedy, since the ancient times. It’s as if Murphy’s Law was stubbornly unleashed every year, the same (and cursed) day.

“The monstrosity of Christmas affects everyone, regardless of social classes. All families gather, in their entirety as well as at the top of their violence; and we relish the idea of throwing two people in the midst of this hellish circus” – stated the three authors, during the preview press conference, at the 32ndTurin Film Festival. The unlucky protagonists are the new lovers, Giulia (starring Alessandra Mastronardi) and Massimo (starring Alessandro Cattelan in his debut as an actor), who find themselves at meeting their own relatives, her uncivilized and ignorant ones, on Christmas Eve (the Colardos), and his rich and elegant ones, on Christmas Day (the Marinelli Lops). The real gem of the film is the bright idea to cast the same actors (Francesco Pannofino, Valerio Mastandrea, Caterina and Corrado Guzzanti, Laura Morante and Marco Giallini) to portray the members of both families, almost simulating the work of a theater company that has to take on the whole show.

The first part of the story is set in rural Tuscia, populated by “self-reported woodsmen” (as called by the authors), surreal and exceptional characters, who look to descend from the Neanderthals that act in the first film scene (the line “The Colardos have existed for 2000 years!” is emblematic). This part works perfectly fine, because it gives the idea of Christmas as the realm of the grotesque and the nightmare, in a visual way as well (the scene of the night boar-hunting is an example of that). However, the second part loses rhythm; the portrait of the relatives, strong point of the film, is less sharp, and humour (conveyed mostly by Philippine butlers of the Marinelli Lops) becomes more banal.

Therefore, on one hand, the directors succeeded in making a film that places above the Italian average (just think about the clear parody of movie love at first sight); on the other hand, they did not succeed in keeping the initial comic sense throughout the film, by showing a decline that is typical of all the products of Italian film market.