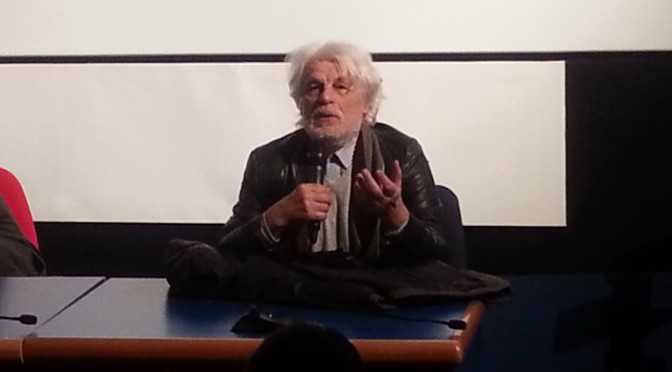 How would you react if one of your family members, or a friend, told you you that “tomorrow they are not going to be alive”? “Prima di andar via” could be the answer.

Directed by Michele Placido, this adaptation of the theatre show directed by Francesco Frangipane and written by Filippo Gili is about a family’s reaction to the son confessing his suicidal intentions. What causes this insane decision is that he cannot live without his wife, who died three months before. In a first moment they don’t understand whether Francesco (Filippo Gili) is telling the truth or he’s just talking nonsense. But Francesco is convinced of his decision and doesn’t want to go back. For him, nothing is worth it anymore, and he can’t picture his future with another woman because no one could ever be as great as Giovanna. The hug scene with his mother is touching, a hug that wants to last forever, full of love and pain.

The film was entirely shot in a small theatre. Lights and scenic design tend to give a sad, melancholic and furious air. The actors are not famous in the Italian cinematographic circle — with the exception of Giorgio Colangeli — but it’s worth writing their names: Filippo Gili, Michaela Martini, Aurora Peres, Vanessa Scalera, and Francesca Alunno. The actors succeeded in representing something that can really touch your soul. A fantastic interpretation from everyone, with no exceptions.

After the first view at the “Cinema “Massimo” on November 24th, Michele Placido, some of the actors and Francesco Frangipane talked about their work with an excited public which warmly greeted the film with a long final applause. Michele Placido stated that it had been a beautiful experience and that he had decided to make it a film right after he saw the theatre show.

Director Francesco Frangipane stated: “The theatre show has hardly been around. The only achievement was the possibility of playing the show at the “Elfo Puccini” theatre in Milan”. Next, the director reflected upon the quality of performances in Italy, maintaining that the actors in this movie have nothing to envy to the so called “famous actors”, even though more well prepared figures are needed in our cinema. “If Italian directors went a bit more often to the theatre, perhaps the Italian cinema would be more lively”. Finally all of the actors thanked Michele Placido. According to them, it is because of Michele’s generosity that this movie made it to the big screen.