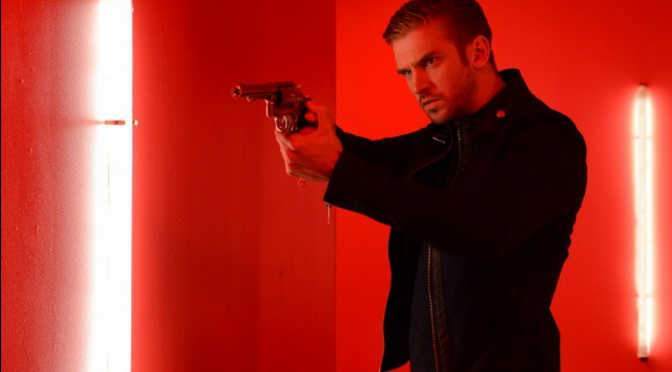 The Petersons are a perfectly normal family, still grieving for the death of their elder son, Caleb, fallen in the Middle East. One day, a boy named David Collins knocks on their door, saying that he has served in the army with Caleb, and that he had promised him to take care of his beloved ones. At the beginning, they are a bit suspicious, but David soon gains the respect and affection of the whole family, including Caleb’s siblings, Anna and Luke. After a few violent episodes happen in the small community, Anna starts to suspect that David is hiding something, and that he’s not really who he says he is.

Director Adam Wingard and scriptwriter Simon Barret, who had already worked together in ‘V/H/S’ and ‘You’re Next’, produce a film that is a tribute to 80’s horror and action movies. We can see it in the photography, which, especially in the end, captures the essence of that time, thanks to a precise choice of colors; it is also evident in the soundtrack, composed with synthesizers that remind of Carpenter’s films (particularly ‘Halloween III’). The plot, a mixture of thriller and comedy, turning to horror at the end, never bores, alternating moments of tension to others of calmness, always managing to keep a light tone that allows the movie not to be taken too seriously: a rare thing to be found in the modern cinema.

The success of the film is also due to the leading actor, British Dan Stevens (Matthew Crawley in Downtown Abbey), whose looks remind us of Ryan Gosling in Drive, film from which The guest has been highly influenced. Stevens’s charisma is immediate from the very first scenes, and the audience cannot help cheering for his character, which makes the events following in the plots even more interesting.

The greatest quality of The Guest may be the fact that it is not necessary to be a fan of horror and b-movies from the 80s to appreciate it (even if the film is full of references, such as Terminator and the previously mentioned Halloween by Carpenter). However, it offers a chance to get close to the genre, providing a great alternative to the modern horror, without personality and mainly based on the gore. The guest has a lot of personality.