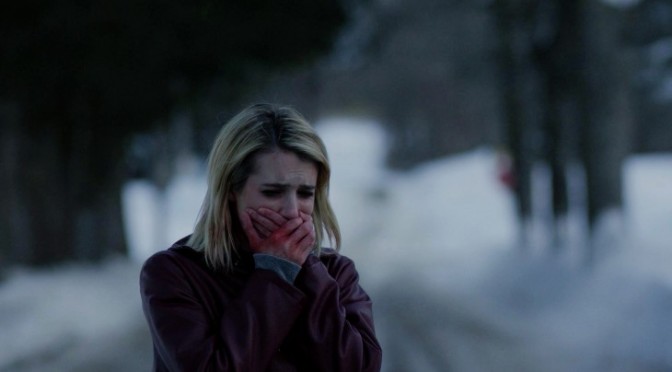 Osgood Robert “Oz” Perkins, son of the actor Antony Perkins, proved to be a wonder with his first work as a director, the horror thriller February. We have already seen him acting in Psycho II and more recently screenwriting The Girl in the Photographs.
February is undoubtedly a film that creates an atmosphere. The theater was immersed in the sharp frost of the snowy streets that were so white they gave a sense of purity. However, such sensation was not meant to last, as soon those streets were going to be spoiled by trails of blood.
The film is set in Kempville, Ontario Canada. It’s February and the students of the all girls boarding school “Kempville” are getting ready to leave for their hometown for the winter break. Kate (Kiernan Shipka) and Rose (Lucy Boynton) are stuck at school because their parents have mysteriously failed to retrieve them. Rose finds herself forced to babysit Kate even if they are not friends but rather share resentment. At the same time, Joan (Emma Roberts), escaped from a mental health facility, is heading towards the school, while Kate starts to have a strange attitude.
In this feature film lingers not only tension but also teenage crisis and inner torments, especially through the characters of Rose and Kate. Its deconstructing montage might create confusion, however, at the end, all the pieces of the puzzle come together.
The film has no shades, only clear contrasts: the breaks between scenes as well as music change are clear.
Just one more thing: pay attention to the cutlery and Donnie Darko‘s bunny ears.