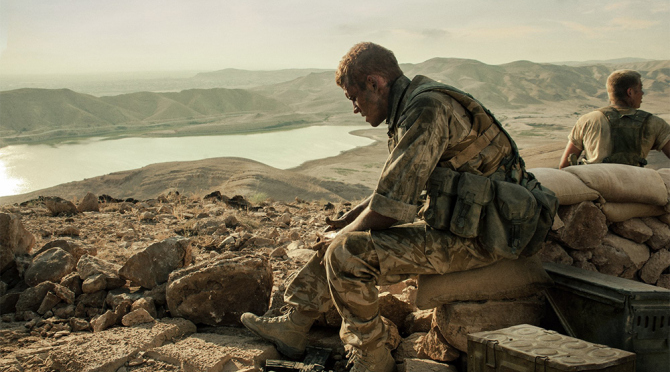 An excellent debut film from British director Paul Katis, after working his way up directing short films. The film is based on real events that happened to Mark Wright and a small unit of British soldiers stationed in Afghanistan, on a ridge near the Kajaki dam.
To disable a Taliban roadblock, a three-man patrol offers to carry out the mission. In a dried out river bed, one of them accidentally detonates a landmine, losing his leg in the process. This triggers a tense and claustrophobic narrative, where shots of vast deserted spaces define an indifferent and merciless setting. Although the film was shot outdoors, the action takes place in a very confined space.
What’s thought-provoking is the fact that even though the film is set in Afghanistan, the indigenous population is kept at a distance from the centre of the action, apart from the very beginning of the film.
Katis favours all that is anti-spectacular, the events are told in a dry and blunt manner. The outstanding performance of the actors playing the main characters cannot leave even the most insensitive viewer indifferent.
One thing that’s astonishing is the sense of humour of the soldiers, who, despite the tragic situation they find themselves in, still manage to defuse the tension. The soundtrack is reduced to the essential, the panting of the maimed and wounded and the noises made by flies cast the viewer directly into what’s happening, making everything more real.
Kilo Two Bravo is a film that gives an opportunity to elaborate on a point of view about war that is still unexplored, namely that of real war, where young people die simply because of distraction, misunderstanding, or just pure bad luck.