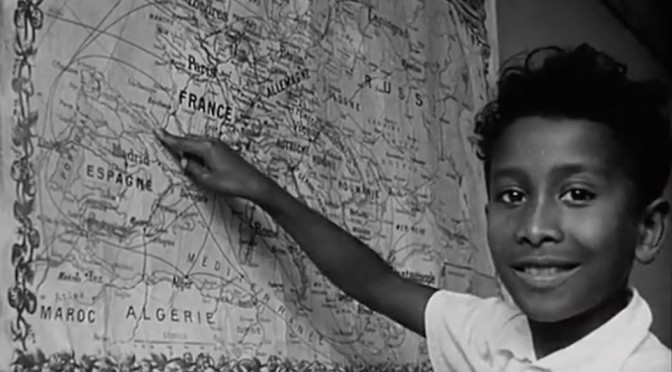 TFFDOC section opens with a quite interesting work by director Rithy Panh, a documentarist of Cambodian origins, who has always made a point of his research on social inequities, sometimes experienced personally. The film “S21: The Khmer Rouge Killing Machine”, presented and awarded at Cannes in 2003, is a case in point; the consequences of the regime forced him to run away from his native Cambodia to find shelter in France, where he began his film studies.

“La France est notre patrie” starts with a sequence showing an overwhelming and devastating jungle which swallows with its roots the area of a house that does not belong to such a landscape. This is probably a metaphor for the topic that the director intends to take on in this work.

The documentary narrates in a personal way the history of the French colonies in Indochina for the whole course of the “rêve”. Rithy Panh softly deals with these issues, without ever stating his anticolonial opinions. The extracts were selected from film footage (silent, black and white and in colour). They show the various aspects of the Federation of French colonial possessions in Indochina: they’re scenes of daily life with its faces, constructions of great public works, industrialisation and agriculture. They seem like beautiful scenarios made out of progress and exploration of this foreign and exotic land, the way France saw it at the time.

Skilfully, the director manages to weave a story based on the encounter and clash between two worlds. He identifies and shows throughout the narration two opposed protagonists: the colonising “white man” and the indigenous “bon sauvage”. He lets the archive footage, interspersed with his tableaux, do the talking. The captions reassure the public on the reason why it’s crucial for the colonising mission to prove successful for everyone’s sake, just like a newsreel of that time would have. It’s up to the editing and soundtrack, however, to give us the first clues about the goal that Rithy Panh wants to achieve. A message that slowly reveals itself, getting us farther and farther away from what we see and read.
It is an intimate process of awareness and discovery for the audience. Images and meanings develop as two parallel lines, only meeting as a result of personal reasoning. Thus, the self-proclaimed colonial reality becomes its very own condemnation. An acute expedient which turns the flowing of time into a weapon which acts as a boomerang.

The documentary constitutes a fascinating history lesson on the events that occurred during the colonization of Indochina, as well as a profound consideration about what we perceive in the present time. The eyes looking at those images have changed. Our society has a different take on that material now. It is a subtle social criticism on past historical events and on contemporary too. Undoubtedly, as the above-mentioned beginning sequence teaches us: nature swallows with time anything produced by white man with the alibi of progress. In conclusion, all communities should be the one and only rulers of themselves or it will be for posterity to judge.