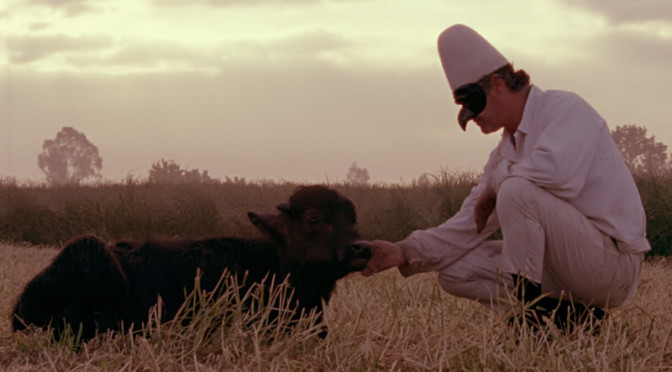 After 27th edition’s winning film La bocca del lupo (The Wolf’s Mouth) TFF dedicated the pre-opening night to the latest laborious work by Pietro Marcello, Bella e perduta (Lost and Beautiful), the only Italian film contending for Locarno International film festival 2015. This bitter tale fuses documentary and fantastical fiction, while poetically denouncing the collapse of human-nature relationship. The film also functions as an off-key requiem for the Italian Republic, a frank protest against the apathy of an immortal caste system of defeatists. The protagonist, Tommaso Cestrone, is a humble, real-life shepherd in line with Marcello’s stock characters, the so renamed “Angel of Carditello” is the only volunteer serving the Royal Estate of Carditello which simbolises the ill-treated and forgotten beauty. Piles of debris and tyres pollute the magic atmosphere of the place that has become a dump for memories. Tommaso is the only one committed to the enhancement from the indifference of the world. Tommaso, among his last wishes, wants to save Sarchiapone, a young talking buffalo that, at times, recalls the melancholy poetry hidden in Balthazar, the donkey protagonist of Au Hasard Balthazar by Robert Bresson. At this stage of the film, Pulcinella appears from the obscure bowels of Vesuvius. He arrives in the nowadays Campania to grant Tommaso’s wish. Pulcinella and Sarchiapone embark on a journey in the forgotten territories of “the land of fire”: a sore journey without hope. Bella e Perduta is a protean film that had a difficult birth. The initial intention of the director was changed during the course of production due to the sudden cardiac death of the real Tommaso Cestrone. For this reason, the film was completed after two years of development. The only choice left to the director was to merge the hints of reality with dreamlike situations. The figure of Pulcinella connects the primordial meaning of psychopomp very intelligently for the immortals. Although the protagonists improvise around a default scenerio, it is difficult to reach the sincere expressive power of transexual Mary Monaco and Enzo Motta, who are the protagonists of “La Bocca del Lupo”. Tommaso and the interpreter of Pulcinella are suspended and suddenly crushed by the power of nature, mother and executioner at the same time. The foolishness of human being is expressed by the look and subjective shots of Sarchiapone who hopes to survive at the mercy of man. But now eveything is destined to collapse and takes attention to the tomb of Tommaso: <<Will we remember this land? >>

Probably not. Maybe yes but it will be very late, and there will remain neither your tears Sarchiapone… nor ours.