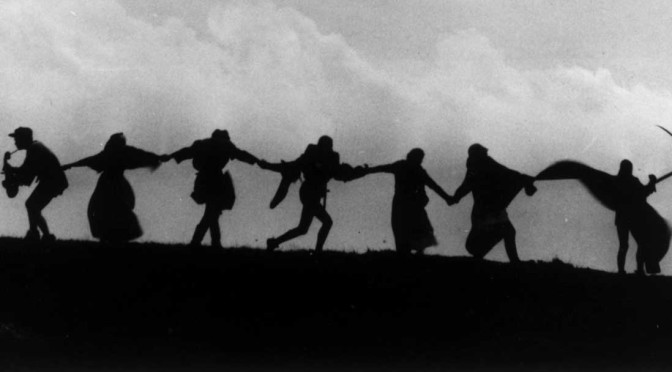 “And when the Lamb had opened the seventh seal, there was silence in heaven about the space of half an hour and I saw seven angels standing in the presence of God and there were given to them seven trumpets.” This is the opening of The Seventh Seal, an enchanting black and white movie directed by Ingmar Bergman in 1957.

The Knight Antonius Block (Max Von Sydow) and his squire Jons (Gunnar Björnstrand) go ashore to a beach. They are both exhausted from such a long trip: they came back from the Crusade in the Holy Land. Anyway they’re safe and they managed to come back to Scandinavia, their homeland. However just there in that beach there’s the Death (Bengt Ekrot) who’s waiting for Block in order to take him away with her. Block challenges the Death to play chess with him in order to stall. In fact he wants to find some answers to some doubts about his faith, that is not so strong as it was before taking part in so many battles in Holy Land.

The game starts: Block has the white army while the Death has the black one. Anyway while they’re playing Block’s trip goes on. In a middle aged Scandinavia tortured by the plague the Knight and his squire keep on travelling and they meet a family of actors (Bibi Andersson and Nils Poppe) with their child and other characters. The Seventh Seal is one of the most important movie in the history of cinema since it’s not just a movie but it’s also something about the major doubts the whole humanity has: does God exist? Is there anything after death? Here some selected majestic dialogues from the movie:

“You haven’t replied to my question. Do you know who watches over her? The angels? God? Satan? or Nothing?I tell you the truth Nothing-

(Jon, the squire, has a materialistic view of life.)

“Are you going to tell us about your secrets?
I have no secrets to tell you.
Then you don’t know anything.
I don’t need to know anything”

(the Death confesses she doesn’t have a purpose of her own. She just operates.)
“I want to know, no faith, no simple hypothesis, I want something for sure, I want God to give me his hand, to disclose his secret face to me and talk to me”

(Antonius Block’s thoughts while he’s looking to concrete answers to his existential doubts.)
The character of The Death is very interesting: she’s always resolute, always ready to disorientate the audience with her absence of soul in her words.
The character of the squire, who’s always ready to give you his materialistic view of life. If you say something wrong or absurd he’s ready to chill you. There are some pleasant times with the family of actors. They help the audience to feel part of the tragedy. Anyway they actually represent hope: they’re some kind of holy family and they’re meant to help the film audience to overcome the horror who has played the Death herself.
The seventh film is one of that film everybody should see at least once in a lifetime!