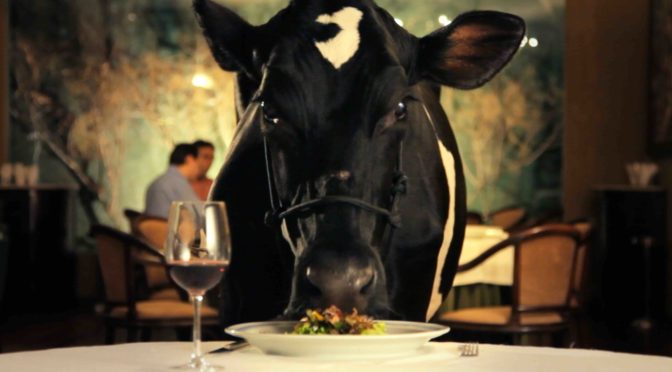 “I am the monolith. I’m a block of black, cold rock, standing in the middle of the desert. We are a forest of eucalyptus. Those who look at us from afar can see us one next to the other, but when the observer comes closer, he will realize that we’re far more apart than he thought”. That’s how the stream of consciousness of Tião’s bovine ends, at the end of a surreal journey full of unsolved questions, to which, maybe, there’s no answer.

A cow that ruminates her fresh grass in a classy restaurant. That grazes on the treadmill of the gym. That keeps a lit cigarette in the split of one of her hooves. An animal that acts like a person usually belongs to a light and witty context. But what if this creature started to think about its whole existence, finding itself unsatisfied with the way it lives? The context would be much heavier and weirder.

Animal político is amusing and irrational, grotesque and disturbing. The odyssey of the cow in the desert is the essence of the fleeting certainties of the human being, who adjust to socially common opinions and behaviours, feeling therefore deprived of his own personality.  However the society has an important role in the promotion of the single person. Moving away from the methodical and flat bond to the taste of the majority, the sense of loss gets worse and pushes the man increasingly to the bottom, bringing him back inevitably to the starting point, which is also the finish line .

But why a cow? This animal daydreams, stares at the horizon and chews the cud all the time, as it meditates on its condition. For this reason, it is the best candidate to undertake a journey in the pursuit of an answer to the mystery of life. Facing Animal político, the audience is divided into three parts: the viewer who laughed, the one who furrowed the brow, and the one who did both. But all worried at the same time: the unexpected jump on the island of the redheaded girl. Halfway through the laic pilgrimage of the bovine, Tião inserted a completely new story, set in another place. The wild girl seems to embody the cruel nature of the Brazilian population, hidden by a harmonious and peaceful appearance. The director piles it on with illogicality and the mystery thickens. Tião’s political animal wakes the spectator up from the slumber of the passive user, reawakening in him the active thinker.