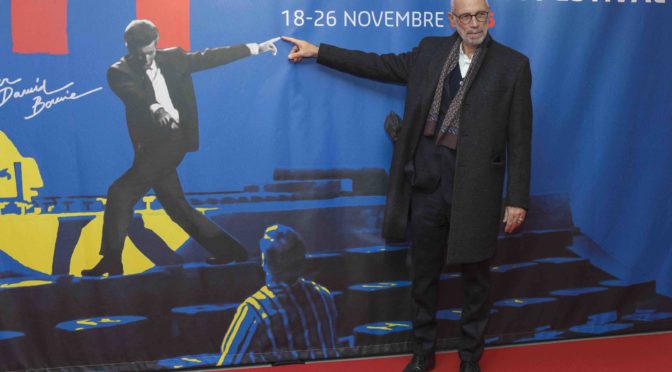 Last but not least in the busy morning is the press conference with Gabriele Salvatores, guest director for the 34th edition of the TFF. He was inevitably asked about the Cinque Pezzi Facili, naming five films he chose to include in one of the sections of this year’s festival. His favorite feature, says the director, is undoubtedly Jules et Jim, both emotional and delicately evocative and also the loyal keeper of a young Salvatores’ memory, who from ordinary viewer became an aware cinéphile.

Alice’s restaurant is the second movie he selected, which combines his passion for music and his interest for the feminine world, which he finds truly elusive as a man. The most genius of the five might be Blow Up, with its astonishing ability to theorize the power of images, that in the cinema world can make something imaginary finally real. The Strawberry Statement and If…. represent the two films “in motion” and the most politically active of the list, which nowadays are still definitely modern.

And what if you had to make a selection of “Pezzi facili – Easy pieces” among your movies? The director, with a tendecy to self-criticism you won’t expect from such a master, admits he doesn’t love watching his own films. But his picks seem to be quite simple:  Marrakech Express brings him back to the beginnings of his career; On Tour hides autobiographical references behind the story of two friends loving the same woman; Siberian Education holds out to be a successful work; and finally Denti, which made the list “despite nobody liked it”.

L’Année dernière à Marienbad, The Tree of Life and Clint Eastwood’s latest (and politically controversial, according to the Italian director) filmography are the equivalent “difficult” pieces, the ones that always give him a hard-time.

Then sensitive subjects are also brought up: today’s young people loneliness is something the director cares about and he disapproves of the unaware use of technology, which can be useful as much as dangerous.

And when he is asked if one day he is going to take the place of Emanuela Martini as TFF director, he states his loyal attachment to the festival but replies very amused: “It’s not cumpolsory to become a festival or a TV-series director, you may as well go on and make just movies”.