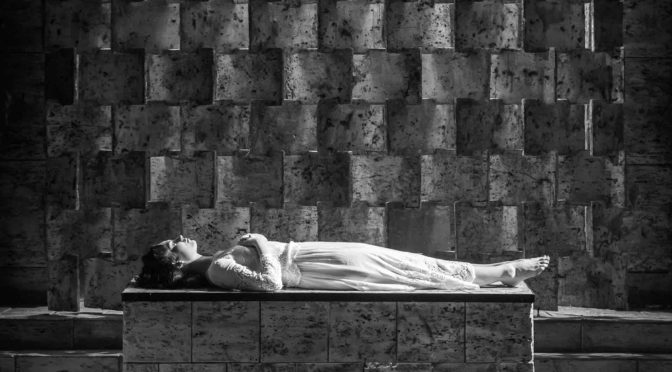 After last year success of Hamlet, played by Benedict Cumberbatch, the Torino Film Festival and the British theatre are united once again (Nexo Digital is responsible for distribution in Italy). This year, it’s time for another classic Shakespearean play: Romeo and Juliet. The tragedy of the star-crossed lovers has been adapted in many forms during the years: from Zeffirelli’s classic to the colourful Romeo + Juliet by Baz Luhrmann; set among Puerto Ricans in New York and in Nazis Prague. This year, the audience had the opportunity of tasting the London theatre scene of last season, thanks to the production of Romeo and Juliet, as staged by The Kenneth Branagh Theatre Company, the theatre company founded by the famous actor.

Branagh may be the contemporary actor who confronted himself the most with Shakespeare’s plays. He decided to put on stage the first tragedy that he directed when he was young. The outcome is a fine adaptation, set in Verona in the ‘50s, co-directed with Rob Ashford. The cast is the main attraction for the general public: playing the young lovers are Lily James and Richard Madden, a well-matched couple, since both had already worked with Branagh in his previous work, Cinderella. It is worth highlighting the choice of portraying Mercutio as an active histrionic dandy old man, overtly inspired to the figure of Oscar Wilde, already long in the tooth. Nobody would have been able to bring to life such important character better than Derek Jacobi, who gives lifeblood to every single line: during the famous soliloquy dedicated to Queen Mab, the queen of fairies, the audience cannot help but see him with the impressed eyes of Romeo, performed by Richard Madden

The essence and the characteristics of the live performances represented at the Garrick Theatre in London are wholly kept in the transposition to the cinema. Kenneth Branagh put on stage a lively and sparkling adaptation, but also characterised by an aesthetics which calls to mind the Italian Dolce Vita and the classical cinema. The cinematic medium helps underlining this classical aspect: while the camera lingers on details that would have gone unnoticed at theatre, lights and shadows emphasise the profoundness and the tragedy. This is remarked by the choice of shooting and broadcasting it in black and white which, along with the titles in classical style, gives the impression of a film produced in the golden age of classical cinema.