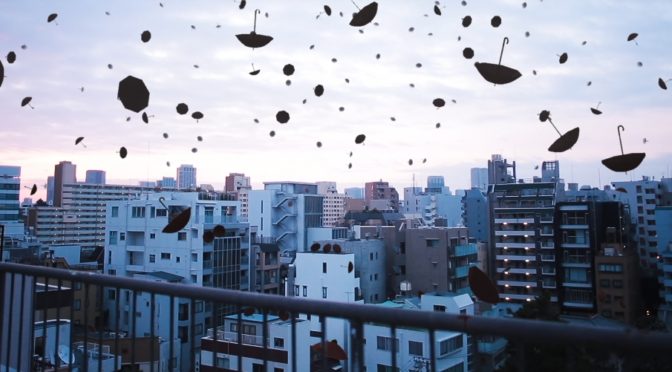 One day Fumiko (Hiromi Nakazato) casually meets,her ex schoolmate Ryota (Hironobu Yukinaga); driven by an irrepressible passion, the two decide to get married. Unluckily Ryouta sees some ghosts, but she doesn’t, and their relationship starts to deteriorate right away.

With Bamy, in competition at the 35th Torino Film Festival, the newcomer Jun Tanaka, presents a charming reinterpretation of J-Horror in a reflective and philosophical key, in which ghosts are just an excuse to reflect on humans’ existential conditions. Despite being about to get married, Ryota appears in fact cold and apathetic, his job doesn’t stimulate him at all and loneliness is a condition to which he will hardly escape.

Since the first sequence (when a red umbrella falls from the sky), destiny appears immediately as a main element. In this respect, during the press conference of presentation at the 35th Torino Film Festival, Tanaka emphasised how the theme of the “red thread of destiny” is a constant element in Asian culture (we can see it in the noir by the Hongkongese master Johnnie To or, remaining in Japan, in Your Name by Makoto Shinkai).

For who’s accustomed to contemporary Japanese movies, this film will be a clear reference to the style of Kiyoshi Kurosawa, a real authority for those who create films in Japan, so ellipses and long shots are routine for this movie: “For us young directors it’s impossible not to be influenced by Kiyoshi Kurosawa, however I tried to make the most out of this influence”, stated the director during the press conference. It is no coincidence that, other than the sequences that recall Kurosawa’s movies (for example the dematerialization of characters already seen in Kairo or the technique of chiaroscuro), we find a personal vision of the staging, like the insertion of gags, till the great surrealist ending.

Another relevant aspect is music: talking non-stop at the press conference, Tanaka leaked out his love for movies. The director underlines how, in some occasions, the soundtrack is “cruel”, completely influencing the film: “For me music is physical and can create dissonance with images, a gag with the addition of music can become dramatic.”

A praise for the two main characters that were able to identify completely with their respective roles; Yukinaga is at his first experience as an actor, and the same goes for Nakazato, who had her debut in 2013 in a minor role (Miroku, written and directed by Kaizo Hayashi).

Bamy is a debut film that surprises for how minimalism, mystery and irony perfectly merge; there are rumours of potential awards, it’s strongly recommended.