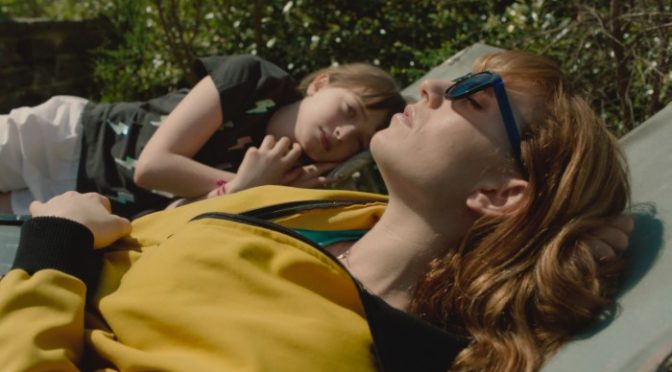 If you would like to watch the movie ”Barrage” without knowing that Lolita Chammah is Isabelle Huppert’s daughter, you would be surprised to see the resemblance between the two actresses. In the movie, as in the real life, they are mother and daughter.
Their way of acting is also quite similar. Chammah and Huppert have lots in common, not only the physical aspects.

Barrage is about women: Laura Schroeder, from Luxemburg, is the young director. There are also three women, from different generations,  as the main characters: Alba (Themis Pauwels) is a ten years old child, who grew up with his grandmother Elisabeth, (Isabelle Huppert). Her mother, Catherine (Lolita Chammah) was absent, without a specific reason. This absence is a mistery for the whole movie. Problem as depression, use of drugs or psycho-drugs, had forced Catherine to leave her daughter when she was a child.

The film could be interpreted as a coming-of-age of all the generations involved and connected to each other said the director during press conference talking about the film, in competition in the main selection of the 35th Torino Film Festival. ”Barnage” aims to talk about a specific moment of Catherine’s life, how hard she tried to make up with her daughter. In this movie there is also a comparison between two generations. After being absent for too long, Catherine comes back home. She s not expecting to resume her mother’s routine, she’s not looking for a relief but she would like to be part of her daughter’s growing process. First of all, her challenge is with herself.

In this not so easy situation, nothing is clear and from a certain point, the roles confuses with each others: the mother starts to use her daughter’s dresses and she starts dancing. She also play tennis against her daughter, and after all she gives up (we can see Alba at the beginning of the movie, under the grandmother’s severe eyes); and Alba, who looks  like Catherine’s mother, but then she runs away and gets her drugs. However, in this total absence of reference points, at the very end we can see some kind of order. The barrier gives up, and it is the starting point to create an emotional connection. And that barrier is also our barrier, it is more a psychological barrier: you have to rid yourself of everything that has been up to a given moment of own life, to grow, as the director explained.

An interesting note concerns the film format chosen, the ”4:3”: a decision taken together with the director of photography. Schroeder builds images by carefully working on geometric spaces (the grandmother’s house, the chalet) and also on the numerous scenes set in exteriors between woods, rivers and lakes. As the filmmaker says, this is the most suitable format to give meaning to the characters inside the space, characters that always occupy a central place around and around them they have nothing. As if they are floating over the choices that sooner or later they will have to take.

In Italy, the film was produced with the support of Torino Film, and it will be released in Spring by Movie Inspired. It was also chosen to represent Luxemburg during the Oscars.