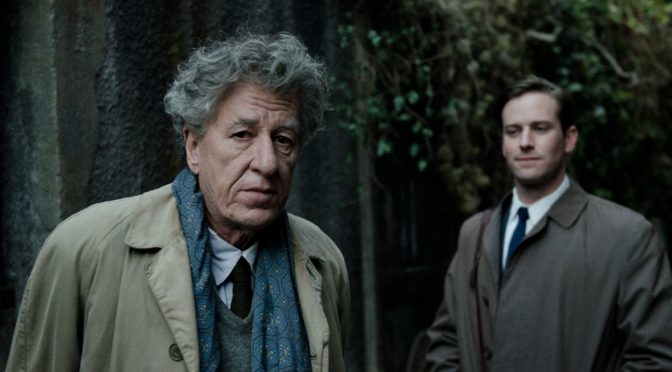 After recently getting in Albert Einstein’s shoes for the anthological tv series “Genius”, Geoffrey Rush is now in those of Swiss sculptor and painter Alberto Giacometti in Final Portrait by Stanley Tucci. The film narrates the long eighteen days needed to paint James Lord’s portrait, after promising at first a quick work, which would need a couple of hours or an afternoon at most to complete. Armie Hammer plays the American writer, whereas French actresses Sylvie Testud and Clémence Poésy give life, respectively, to the artist’s wife Annette and Caroline, the prostitute who for four years had been his muse and lover.

The movie, set in Paris but filmed in London, takes place mostly in Giacometti’s study:  Lord comes here every day to pose, but the initial enthusiasm progressively decreases because the painter is always unsatisfied with his own work. He paints and then erases the facial traits of the man, reiterating that the portrait will never be completed. The colour palette of the scenes recall those used by Giacometti in his works, mostly using greys/whites/blacks/ochre , and the movie camera pauses man times on the details of Hammer’s face, as to allow the audience to study the details together with the artist.

During those weeks the friendship bond between the two strengthens – the dialogues about other painters are fun, and Giacometti is very outspoken; Lord meets Alberto’s brother (played by Tony Shalhoub, with whom Hammer builds a connection based mostly on glances) and Annette and Caroline, observing their dynamics.

The repetitiveness of the days takes its toll on the audience as well as James Lord, who is physically and mentally exhausted by the hours spent posing and the painter’s dissatisfaction.: in the study, time seems not to pass, the dynamics between characters who are trapped within themselves keep on repeating and not even the outside scenes can break up the monotony. The only breath of fresh air comes with Caroline, who is visually characterised by bright colours and an energetic and lively personality which is, just as with the other characters, not analysed enough.

Coming back behind the movie camera, Tucci has created a biopic with great care and attention to detail (also thanks to the set designer, James Merifield) that, however, does not go deeper than the surface, only showing the audience good performances without giving the construction of the plot too much thought.