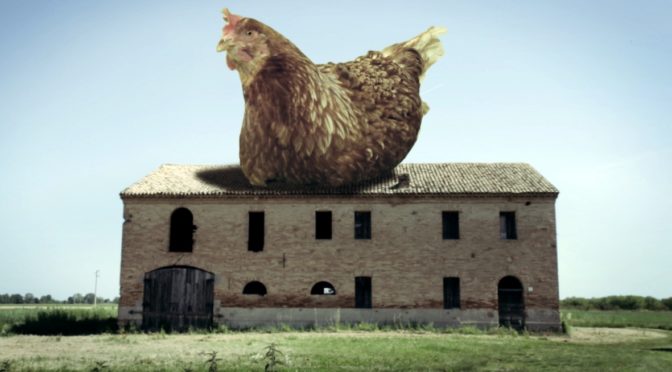 The theatre fills up with ears of wheat, but they are not those of the wheat fields in Cotignola (a town in Romagna, on the banks of the Senio river) that are seen on screen during the screening of the film, but they are being distributed to cinema-goers while they are waiting to get in. “It’s a documentary, but it’s not a documentary”. Ten minutes are enough for us to understand: the rural atmosphere will very soon change into a surreal and dreamlike vibe.

Nella golena dei morti felici (“In the bottom land of happy death”) opens with the sight of a rural landscape, with bales of hay and farmers working their lands. In the background, the enormous countryside is a theatre or, better, an arena made of hay. And the arena really exists: every year, in the last fifteen years, the community of Cotignola works hard to host a cultural event, not only with the purpose of adding value to their roots, but also to give value to art itself, with many exhibitions, music and dancing. Marco Morandi records the birth of this project (the movie was shot in the summer of 2016) going with the flow of the spontaneous humour of the characters. 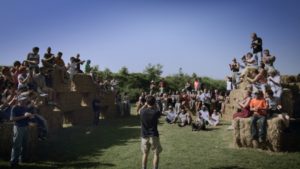 It is a “folk” cast, since the actors are the same people who live in these places. Mister Coppi’s chickens, who live in his rural theatre, suddenly become gigantic, standing above the roof of his house. A voice coming from above talks to mister Coppi himself, saying: “Are you Coppi, the farmer of the bottom land of happy death? [..] I wish you, my dear people, that death will greet us dancing.”. Coppi will answer these words saying: “Oh my, dancing. And what if someone doesn’t know how to dance?”. Death is coming, but the audience can’t help but abandon themselves to laughing, and not just once. This is one of the effects of La golena dei morti felici: savouring an often forgotten authenticity, we feel the peace of the countryside, following the characters’ humour.

The protagonist is the dialect of Romagna, but a deeper consideration about the meaning of life is juxtaposed to the humour: as the tale goes on, mister Ronconi and Mario will accidentally lose their life. It is mainly through Mario’s journey in the afterlife that we can truly understand the whole message of the movie: he would love to come back among the living and go back to his bottom land, where he was truly happy. Morandi’s objective to pay homage to his land was successful, thanks to directing choices that were far from ordinary.

This is a curious documentary, which is beautiful to watch and especially to hear (Matteo Scaioli’s music is fundamental for the character of the film). The only question left is if Nella golena dei morti felici can be equally appreciated by people who have never experienced the reality Morandi is narrating.