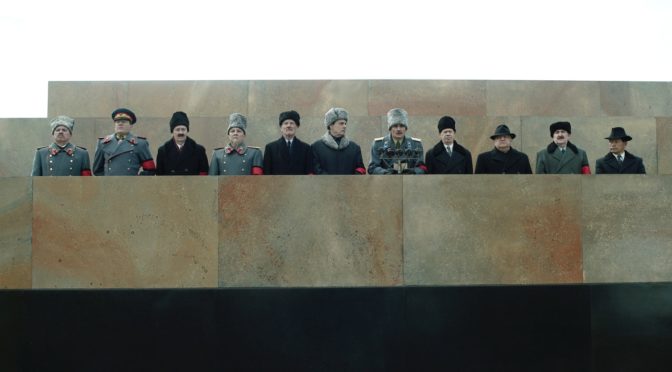 Armando Iannucci became famous all over the world for his political satires. It is not surprising that in his desecrating comedy about the death of Stalin, Steve Buscemi plays the role of Nikita Chruščёv. This film has an internationally renowned cast, including actors such as Simon Russel Beale, Jason Isaac and Micheal Palin. The international cast is an added value to the Scottish’s director work.

In March 1953, Stalin was hit by an ictus and died. The Politburo’s members begin a keen struggle over the succession. Beria and Chruščёv are the main contestants. Both look for the political support of their colleagues; while Malenkov, the vice of the dead dictator, is not able to handle the situation and his power.

The spontaneity in which the Palituro’s members give cruel orders and at the same time their deep sense of humanity, are elements which contribute to turn a tragic situation into a comic and grotesque one. The cast, indeed, is made of comic actors. Iannucci, who wrote the screenplay too, states that it was easy to portray the characters because he already knew the cast. Therefore, he has created the characters considering the actors. 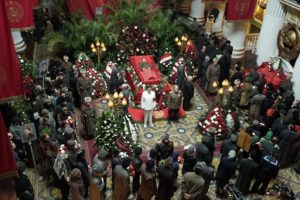 His characters don’t belong to the traditional dichotomy good versus evil. They casually end up substituting for an important figure such as Stalin, driven especially by the will to survive. Simon Russel Beale plays the role of Beria with ease, while the Steve Buscemi’s performance is characterized by supreme irony. At the beginning of the film, Beria slyly plots against his colleagues, while Chruščёv seems to be ended up in that situation by chance. In the second part of the film, there is a role reversal and Chruščёv plays out a fake trial in order to execute his rival.

The director, inspired by the authoritarian politics of the European scene, has decided to portray the authoritarianism world which has led to the mass political movements. The chance is given by the film adaptation of a graphic novel about the death of Stalin, which contained “frightening and incredible events to tell.” (Armando Iannucci’s press conference). The peculiarity of the film is that it depicts actual events as a farce: what seems to be credible is actually false, while what seems to be invented, has really happened. Even though it is a comedy, the film shows both the Politburo’s members, and the citizens scared of the deportations, the gulags and the executions.

The film shows us the cynical and cruel nature of power. It has a circular structure: it ends in the same theatre where the first scenes took place, symbolizing the cyclical intrigues in which everyone is involved, foretelling the mocking dismissal of Chruščёv.