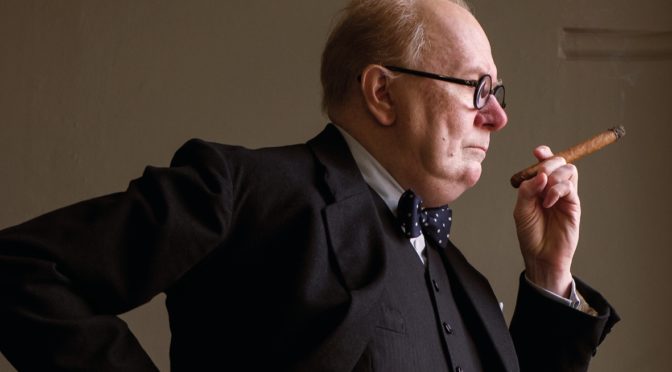 Before Christopher Nolan’s Dunkirk, the Dynamo operation and the retreat toin Dunkerque had already been the protagonists subject of a moving long shot in Joe Wright’sAtonement. Ten years later, Wright himself deals again with this famous and important
event of British history one more time, but he does it from the backstage, telling the story of how it all came to that and mainly talking about the man behind that desperate rescue (which later turned out to be a very important moral victory):  Winston Churchill.

Darkest Hour covers the time span between the resignation of Prime Minister Neville Chamberlain’s resignation, which then lead to Churchill’s designation, and the start launch of the Dynamo operation, that which was trying to bring back home more than 300,000 British soldiers who were blocked stuck between the sea and German fire. Churchill strongly fought so that Great Britain would not accept any compromise and a peace treaty with Hitler’s Germany. Darkest Hour tells the difficulties the Prime Minister found on his path while trying to assert his position with a rapid pace and claustrophobic locations.

Churchill is still today the most loved British Prime Minister and, even though he committed some mistakes during his long political career, he can only be remembered as the man who saved Europe from the Nazi-Fascist menace thanks to his own obstinacy and pride.

The illusory slowness of the plot is contrasted by Churchill’s liveliness and temperament, “an actor in love with his own voice”. The sharp script, marked by an unmistakeable British humour, is totally at the service of his histrionic character. 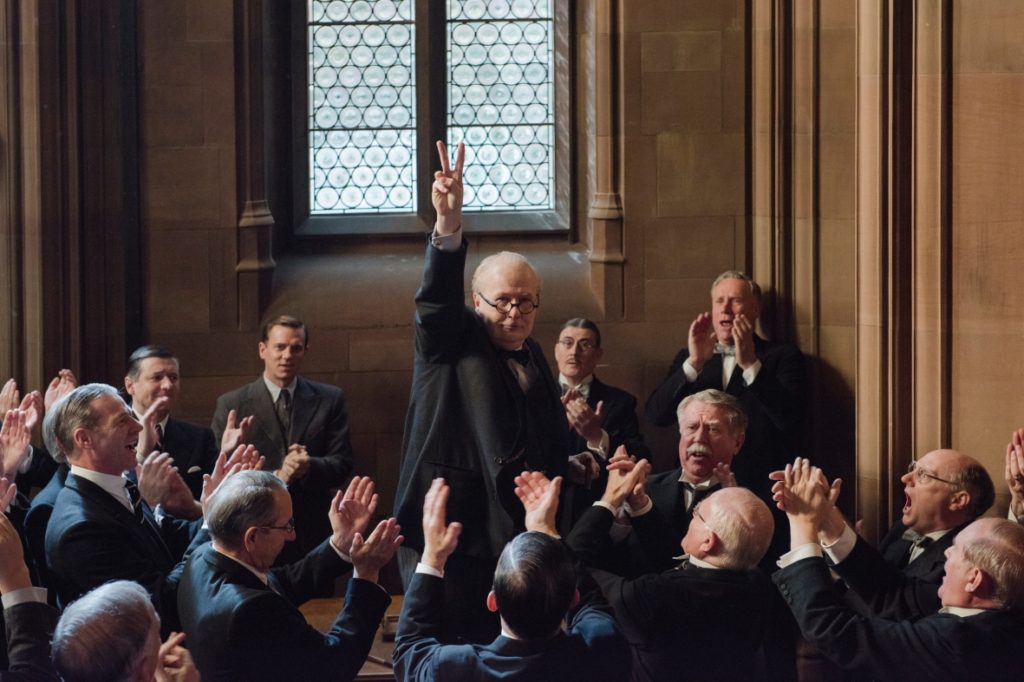 Churchill’s private and public figure is without any doubt what Wright built his film around, and Gary Oldman’s performance shows a truthful portrait both of the determined and grouchy statesman and of the elderly man “who whines a bit too much” when he is nervous. The first time the audience see Churchill is through the eyes of the young and scared secretary, Miss Layton, during her first day at work. Immersed in the semi-darkness of the bedroom, wearing a pink nightgown and with the ever-present cigar in his mouth as well as the ever-present glass of scotch in his hand, Churchill may be intimidating but he also feels immediately likeable, with his frank and witty jokes that make the audience smile more than once.

In the lucky Netflix TV series The Crown, the task of interpreting Winston Churchill on the screen fell on John Lithgow, who did that just perfectly. Gary Oldman’s interpretation is just as good as the main character in Darkest Hour, with Kristin Scott Thomas has his wife Clementine. Oldman is almost unrecognisable with his physical transformation, but his unique and expressive blue eyes emerge from the makeup-aged face and pierce the screen, mainly in the scenes where Churchill, his eyes directly towards the camera, talks to his citizens during the darkest hour.

Joe Wright hits the mark again and shows his ability as a director in bringing events that are deeply rooted in British history and never seen before on the big screen. As expected, Darkest Hours is a film able to engage and excite the audience, and it will probably be a great opportunity for Oldman to earn an Oscar nomination. The elements the Academy likes are all here: biopic, physical transformation, charm and History with a capitol H.