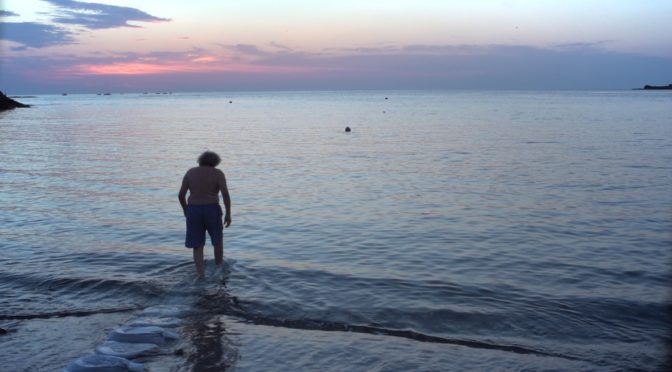 Shown together in the “TFFdoc” section of the festival, For Now and Le rêve de Nikolay are two documentaries that – even though they are very different – share the theme of personal dreams and their way of coming true.

For Now is a very particular medium-length movie (32 min), that visually narrates, accompanied by some thoughts whispered by the narrator, all the cities philosopher Walter Benjamin wanted to visit, but never managed to due to the Nazi persecution that led in to commit suicide. Herman Asselberghs, a belgian artist whose work focuses on the blurred limit between images and sound, between poetry and politics, between the world and the media, creates a movie that can be defined as “benjaminian” even without having Walter Benjamin as its main theme. The movie shows Tel Aviv, Ramallah, New York; long sequences of images of the cities; streets, parks, scenes of everyday’s life; people waiting, walking, killing time. It has no sound other than the whispering narrating voice, that guides the audience to a deliberation on mankind, the world, time. And it’s time itself that, in Asselberghs’ framing, seems to stop.

Le rêve de Nikolay tells a very different story, but also a similar one in some ways. These movies indeed show how a man’s curse can either be not being able to fulfill his dreams, or managing to do so.

In the ‘80s, in a communist Bulgaria, a man decides to travel the world with Tangra, the sailboat he built in his garden year after year. Nikolay’s venture is mainly symbolic: as the man himself states during the movie, he could have reached the same purpose by taking an easier road. Nikolay wanted to show all the young people in Bulgaria that,  even in a country as underdeveloped and stagnant as theirs, anyone could reach their goals. The sailing around the world is a metaphor for the destruction of the Iron Curtain and for the quest for freedom.

The documentary (47 min) is entirely made of video clips filmed of Super 8mm film by Nikolay during his adventure and of recent interviews in which he tells his story and talks about his present life. Director Maria Karaguiozova sets her work in a way that makes us reflect on how, with time, in a more and more commercial world, people have progressively forgotten about this man’s venture and it has lost its relevance.

“What I really wanted to convey – the director explained after the screening –  was the discrepancy between the legend of Nikolay during my childhood, and the Nikolay of the present day, a man my country has forgotten.