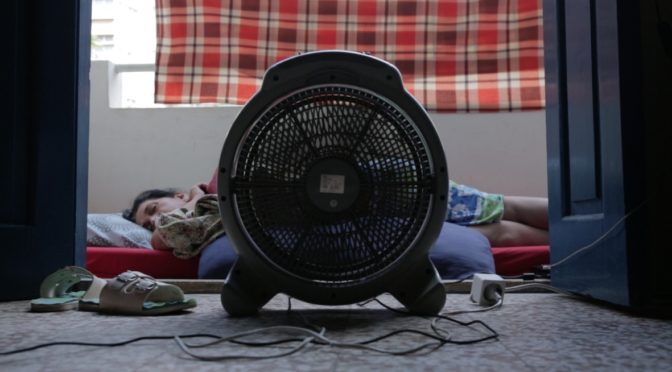 I Used to Sleep on the Rooftop is the first feature film by Angie Obeid, a young director from Lebanon. It is a deep piece of work on many levels: the movie camera moves indiscreetly inside the director’s own apartment (and it stays there during the whole movie), while she herself tells the audience Nuhad’s story. Nuhad lives in Damascus with her husband and their two sons (one of which is Angie’s friend). The sudden start of a war forces the woman to re-evaluate her life and to decide to leave.

The destination is Angie’s apartment, where the woman will stay for ten months, in the centre of Beirut. They are two female figures who belong to different generations but are connected by the wait. Angie is waiting for a phone call to make her future come true, whereas Nuhad is waiting for the right moment to leave the continent and go to Germany, travel through France and Spain and maybe end up in Portugal. Days go by all the same, only marked by lunches on the balcony, phone calls, cleaning, the sound of Angie’s accordion, Nuhad’s laugh, their secrets whispered on the sofa and on mattresses that were put on the floor, with the constant buzz of a fan in the background. 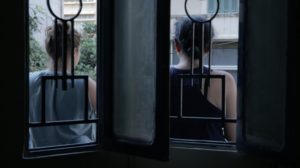 “I wanted to talk about my story and her story” – says the director – “but Nuhad’s proved to be more interesting.” Age is not a restriction: Angie decided to tell a story about courage, with Nuhad abandoning her family and her city not because of war but to find herself. Nuhad is an example, showing the changes happening in Syrian women and the consequences of the war, bringing changes into the social and personal structure of every individual. Nuhad puts herself out there, learns some French and does everything on her own, giving the audience the impression of never having doubts or a moment of vulnerability. Still, Nuhad turns the radio on every morning and listens to the horoscope, looking for answers from that unknown voice, hoping that it will give her some comfort someday. “How do you think I will look when I’m old?” Nuhad asks Angie. Angie looks at her, inspecting her for a few seconds, but doesn’t answer. Two complementary female characters that are forced to split up. In the final scene Angie’s apartment is empty, the last thing that was brought away is a mirror: Angie and her movie camera are reflected in there, she is alone now and will never be able to recognise herself in Nuhad’s eyes.

The wait is over, the wish to go somewhere else has been fulfilled. This is a strictly autobiographical documentary, and a model of female courage not only for the Eastern society but also for the West.