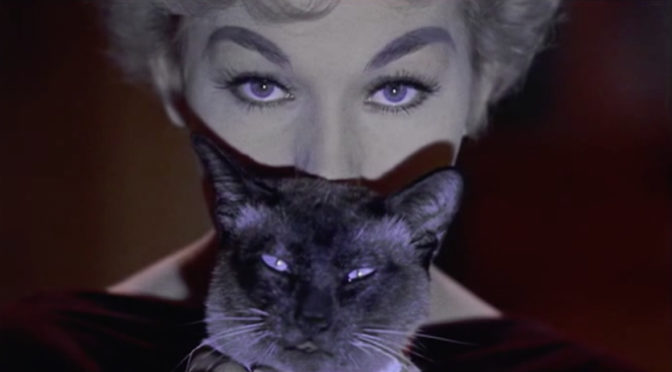 The main characters on the poster for the 35th edition of the Torino Film Festival are Kim Novak and Pyewacket the cat: it is not a surprise, then, that in this edition of the TFF there has been a special retrospective dedicated to our four-legged friends, a homage from the director Emanuela Martini – a cat and film lover – to the “BESTIALE! Animal Film Stars” exhibit at the National Museum of Cinema.

Mysterious, magnetic and unpredictable, cats have been the protagonists of several films in the history of cinema, sometimes even stealing the show and overshadowing human characters. 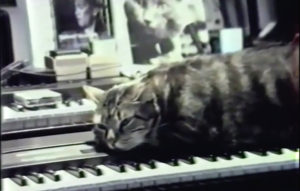 The Cheshire Cat, however, is anything but sleepy, the ambiguous purple cat with a giant smile that disappears and then reappears as it pleases in Alice in Wonderland by Clyde Geronimi, Wilfred Jackson and Hamilton Luske, which is one of the most loved Disney classics, as well as one of their most original and experimental pieces of work.
The film, based on Lewis Carroll’s book with the same name, tells the adventures of young Alice, a lively English girl who, following a talking white rabbit, falls down a well and suddenly winds up in a fantastic world, where nothing seems to make any sense. Here, among settings that look like they were taken from Dali’s paintings, Alice meet many bizarre characters.
The Cheshire Cat will be the one telling Alice that in Wonderland almost everyone is crazy, and he will not only show her the way that leads to the White Rabbit, but also get her in trouble with the terrible Queen of Hearts, putting her in great danger. The unpredictable tybe, a perfect synthesis of a world where the non-sense triumphs. 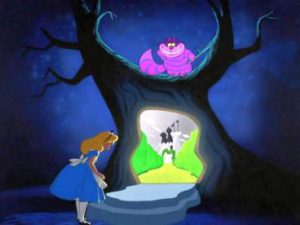 In Rhubarb by Arthur Lubin an eccentric businessman decides to adopt a lively stray cat, and calls him Rhubarb. At the moment of his death, the millionaire leaves all of his fortune and a baseball team he owned to the cat. The cat’s tutor, Eric Yaeger (Ray Milland from A Perfect Murder) persuades the players that the cat is good luck, to sedate their embarrassment and discontent.
The team incredibly wins match after match, but things get complicated when Rhubarb gets kidnapped. It’s a lively comedy, almost of Disney imprint, and it might be the most “cat-centric” film of the whole festival. During the shooting, 14 different cats played the role of the main character, but the undisputed protagonist is Orangey the cat, a true Hollywood star of the ‘50s (he also played a role in Breakfast at Tiffany’s). Rhubarb might not be a masterpiece, but it surely is a 90-minute-long concentrate of entertainment, and the audience can’t help but grow fond of the irresistible Rhubarb. 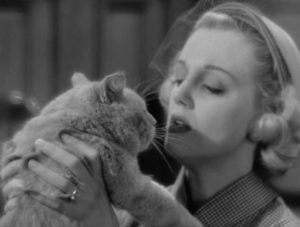 Money is fundamental also in John Gulling’s The Shadow of the Cat, a gothic thriller where Tabitha the cat is the only witness of her owner’s heinous murder, commissioned by the husband to get his hands on her inheritance.
The peaceful tabby cat then changes her behaviour and becomes a sort of avenging spirit, that will bring the culprits on the verge of madness, helping the lady’s niece solve the mystery.
Tabitha’s apparitions are similarly structured as those of ghosts that haunt houses in horror movies; they are very different, however, because of the comical moments that characterise The shadow of the Cat. Really interesting characteristics of the film are also the sequences seen through the cat’s eyes (where images are distorted) that allow the audience to identify with her. 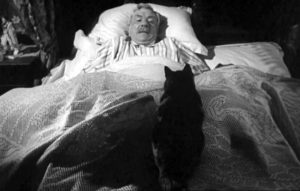 Inspired from one of Poe’s most well-know stories, Black Cat is an Italian horror thriller directed by Lucio Fulci. In a small British village many mortal accidents are occurring.  Investigating with a Scotland Yard detective, photographer Jill discovers that a black cat was on every crime scene and that Professor Miles (Patrick Magee), an ambiguous psychologist with paranormal powers, might have been involved in the accidents. We might say that Black Cat is a film that got it half right. On the one hand it was able to introduce a disturbing and ghostly atmosphere without giving up on very violent scenes. Thanks to non-conventional camera movements and an excellent photography, Fulci is able to achieve some sequences that are really impactful, enhanced by the soundtrack by Pino Donaggio (who won the Gran Premio Torino at this edition of the Torino Film Festival). The movie misses the point with a vague and sometimes ridiculous plot, as well as with its horrible special effects. In the end, it is really hard to get attached to the characters, also because of the terrible actors (with the only exception being Magee). 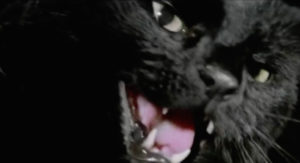 Last but not least, in Bell, Book and Candle by Richard Quine, Gil the witch (Kim Novak) uses her own cat Pyewacket to cast a spell and seduce Sheperd (James Stewart): this is the moment that was captured on the poster for this edition of the Torino Film Festival.
A funny and romantic English comedy with an exceptional cast, this movie not only has an insistent plot but is also extremely ironic and sophisticated. Pyewacket seems extremely cold and detached, a witness with an unmoved and almost charming gaze.