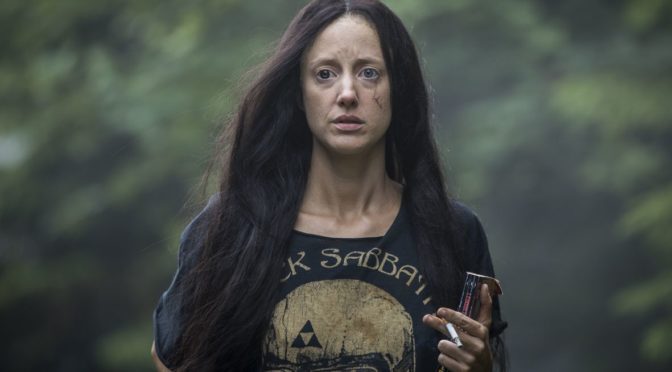 These two words tormented me as I tried to rearrange my impressions on Mandy, a film that is atypical but coherent with the (short) filmography of its director.

The vision of this work is comparable to a long rhapsodic hallucination in which the plot becomes a marginal element, characterized by a lack of logic, banal dialogues, stereotyped, superficial and at times contradictory characters.

The kidnapping of Mandy (Andrea Riseborough) by a sect and the subsequent revenge of Red (Nicolas Cage), which makes the second half of the film a bloody revenge movie, are a mere pretext, functional to the realization of a work based on an excessive use of alienating visual and sound effects. 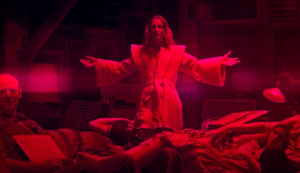 Much of what is shown does not find an explanation within the work, like the true nature of the protagonist who appears unhuman as she comes out of the water and walks through the trees, with a void expression and unnaturally large and black pupils. Anyway it is clear that to create a coherent story was never the intent of the work, which proceeds between inconsistencies, inexplicable situations and jokes that seem to come from the teenage television series Scream (“You ruined my favorite shirt!” shouts Red while he easily kills off one of the creatures that contributed to the kidnapping of Mandy and that until a few minutes before appeared far away from being killed with a box cutter). 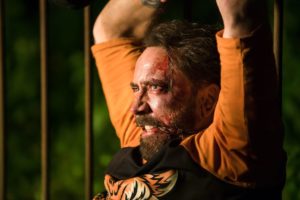 In this context everything seems to happen mechanically, especially throughout the second part of the film when Red simply goes to the sect’s members, finding them without any effort and kills them with an inexplicable ease.

However the difficult comprehension, due to the lack of will to explain much of what is shown and to the excessive use of special effects that may not be pleasant to some viewers are, in my opinion, attributable to the director’s intent to make his style immediately recognizable and to create a loyal audience which is able to identify a common thread between his works.