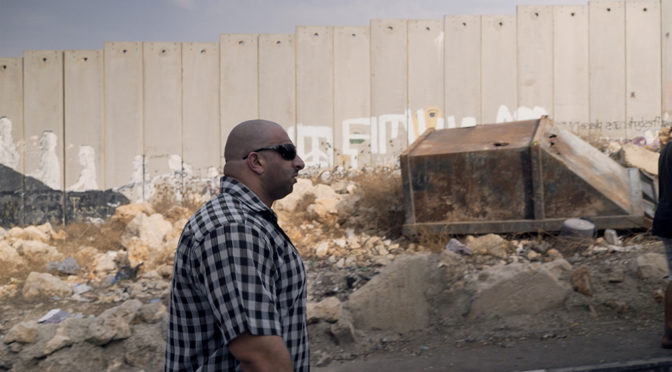 Bodybuilder, taxi driver, thief and art dealer: Walid called The Beast is the first person that the director Marco Proserpio met after crossing the checkpoint from Jerusalem to Bethlehem. Along the way the huge taxi driver told him about how he carried off four tons of cement from the artwork Donkey with the Soldier by Banksy and how he put it up for auction on eBay for 100.000$.

Proserpio sensed the great number of themes that could have been developed from the conversation with Walid, and he cleverly clasped issues which are closely legal with reflections on the contemporary art world and its market, always keeping the attention on the Palestinian issue. In fact, the name of Banksy is just a shining light that attracts the curiosity. It is a pretext to talk about the West Bank and about people from Bethlehem, whose opinion, in the documentary, have the same value of those of lawyers, celebrated artists, collectors, restorers and curators. 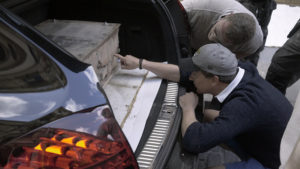 The Man Who Stole Banksy tells us, with a thriller appearance and a documentary linearity, the story of this graffito that the Palestinian people disliked. Indeed, the picture of the portrayed donkey has caused misunderstandings and aversions, even though this kind of art was generally appreciated as part of a subversive aesthetic and of a protester culture with a strong political impact.

The film production has been long and complex, not just for the large number of issues discussed but also because it was not easy to tracks down the protagonist of the negotiation and to follow the path of the artwork from Bethlehem to London, passing through Copenhagen. After several years, travels, deepened issues and collected opinions, this film finds its strength and its personal voice thanks, in part, to Iggy Pop, a sort of punk Virgil who helps to sort us out from the thorny issues that the film raises. 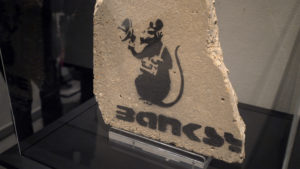 In a world in which pieces of wall can be sold for hundreds of thousands of dollars, it comes natural to make a parallelism between Proserpio’s film and the documentary The Price of Everything by Nathaniel Kahn -submitted to 2018 Sundance- that explains how, sometimes, the art market goes against the will of the artist themselves, who would prefer to see their work hang in museums rather than auctioned as speculations or whims. In the street art world told by Proserpio, the artist’s will is expressed in the artwork itself, because a wall is even more democratic than a museum. The street art works, their perishability and their usability are closely linked with the urban environment in which they are carried out. There can be no doubt that this art belongs to everyone, but if Banksy realizes devices to destroy his works at auction and if Blu, as the director tells us, wipes out his works from the walls of Bologna as a protest, it becomes essential to ask ourselves who “everyone” is: the Palestinians which can benefit from the media attention? Restorers and curators who try to preserve it? Collectors who decorate their home? Walid who liquidates for the community? The Man Who Stole Banksy does not answer these questions, but the intention of talking impartially about different opinions does not leave the viewer confused, on the contrary lets him free to peacefully make up his mind.