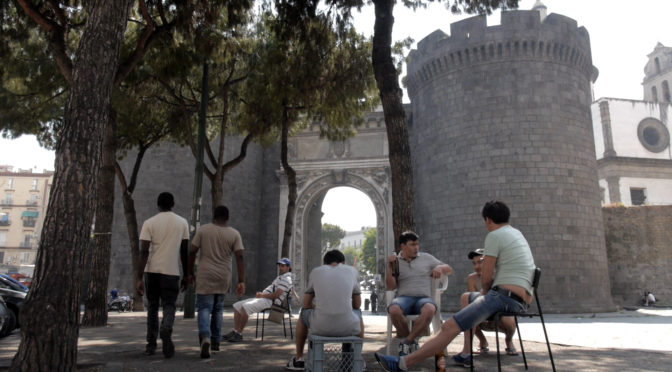 The door is a multi-symbolic element, a self-assured space between the inside and the outside, it is a limit, an obstacle or a symbol of welcome and transition, a symbol of change. Marcello Sannino, around 2010, decides to talk about Naples and he does it by putting at the centre of his project Porta Capuana; he does not know yet what will be the outcome of the film but what he has for sure is the idea to try to represent Naples and its several peculiarities. Faces, objects, social gatherings, music, screams and laughter; everything passes through that monument which has always been a symbol of transition towards the heart of the city.  Staying nearby you can admire the everyday life that changes but that at the same time, perpetuates the usual routine.

The film, whose title bears the name of the monument at the centre of the project, refuses the narrativity and the typical development of the documentary. It appears to the viewer like a moving mosaic of many lives and many gestures. Right the latters are at the heart of Sannino’s thought. The directory is himself a frequenter of Porta Capuana and a spectator of everything that the film shows. The cameras, changed every year, bring on the screen a series of different formats, bearing testimony of the timelessness of the film that lights up this microcosm and that investigates without a specific narrative intention. The importance of the seized moment, of the unrepeatable gesture, or of the everyday life prevails on the need for a linear narration. Faced with this anthropological variety and with these lives that intertwine passing under the historical door, the viewer is called upon to intervene on the film: he has the opportunity to create links and to find narrative connections. The beginning of Porta Capuana is like a documentary: a man shows the Castel Capuano site, telling its history and its anecdotes. The director reveals, during the debate at the end of the screening, how that beginning, apparently conventional, it was a result of chance: he fortuitously met this person while he was showing the castle’s to room to an acquaintance. This anecdote makes us wonder about how Naples loves to tell its own story. The same soundtrack, signed by Riccardo Veno, could be omitted in favour of all those live-recorded sounds which often include music and songs. For this very reason, it would have been excessive, and maybe useless, to have a voice over that explains and describes what the camera shows through its images. 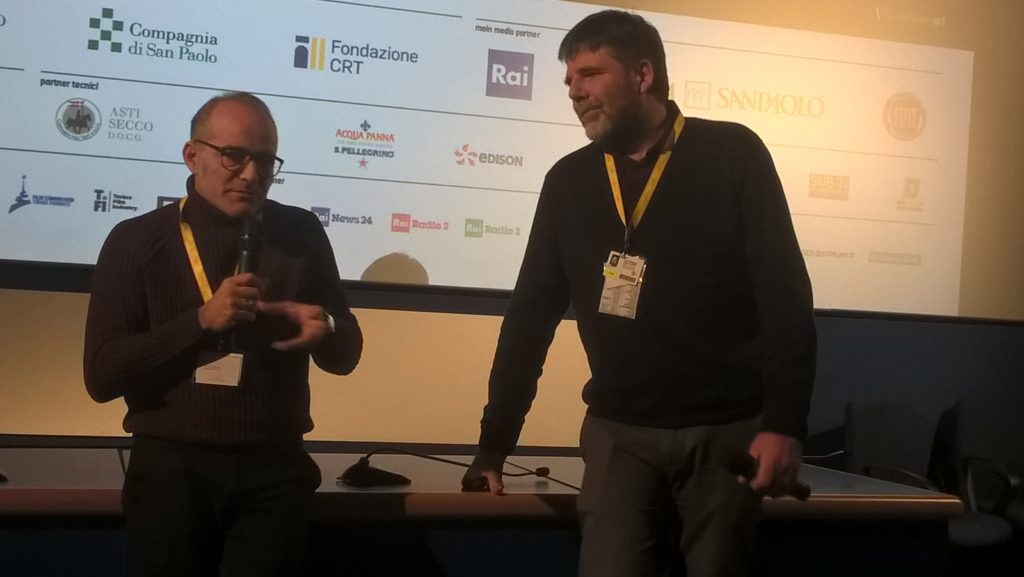 The director affirms that during the editing process, he created a chapter structure and logical connections: a chapter is dedicated to the emptiness and to the abandonment of those places that once were populated and that offered jobs, like an abandoned factory of Valentino’s shoes. A chapter is dedicated to churches, from the Cristian to the Baptist one and then it focuses on those pagan “churches” which now are halls of sports betting; another one is dedicated to faces etc. The order that Sannino gave to his film, stands out in particular in the initial part in which the vintage footages- one of these is from the Lumière brothers- intertwine with the contemporary ones, sometimes highlighting the invariability of those places and sometimes showing their current abandonment.  Anyway, the Parthenopean city is charming for the preservation of its rites and its habits. For better or worse, time never changes in those piazzas, alleys and in those buildings resonant of noises and songs. The director himself, affirms that if his film was had been shot in black and white, ignoring the technological breakthroughs, it might have looked like a vintage footage.

Finally, Porta Capuana is like its town, a cultural and linguistic babel. The images of those Algerians and Africans people who come together in the betting centres, in the piazza or in front of a big-screen tv to follow a game of their national football team, are emblematic. So, the film also talks about the welcoming of those ethnic groups who fled from their reality, devastated by pain, and who here found their temporary house.  Sannino himself remembers those times and how many different ethnic groups populated that zone when he was younger.