In 237’ of pleasant and interesting interviews, Kristina Kondrad’s documentary, Unas preguntas wants to narrate the identity of Uruguayan people, tormented and, at the same time, tired from years of poverty and dictatorial and military governments, as well as its will to live freely. The opportunity to describe what was happening on the streets with a microphone and a camera arrived in 1987. At that time began the first demonstrations, which asked the Government the abrogation of amnesty to those soldiers who during the dictatorship were convicted of many crimes like the torture and kidnap of several people. From these waves of protest came the director’s will of acting as a catalyst of ordinary citizens’ thoughts. She intentionally avoids the names of politicians, writers, distinguished people and with lively curiosity walk through streets, squares and markets, looking for answers for the numerous questions, beginning every interview with: «What is peace for you? ». Peace was the word disputed between the right and the left alliance. It was what politics promised to a tired population, both with the maintenance of impunity law and with its abrogation. In a centrifuge of election propaganda, most people had their own concept of peace and everyone wanted it.

The efficacy of this documentary lies not only in the authenticity of people’s answers, but also in the protagonist, the interviewer Marìa Barhoum, almost invisible on the screen. The talent of this woman lies in the ability of never answering to the interviewee with an assertion but instead with a further question. She almost seems to propose a philosophical process that guarantees the reasoning even in those individuals, who initially gave vague answers, did not know what to say about the subject or revealed themselves shy in front of the camera. In a Socratic way that includes questions before answers, even the most introverted people become friendly towards the interviewer and with her calm, rational and delicate manner of asking questions, which never has the arrogance to put her beliefs at the centre of the debate between the two alliances. 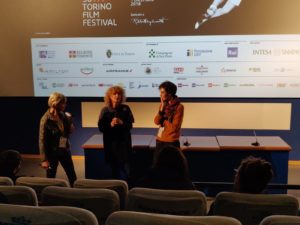 Because of the calm that she instils in her questions, a natural and instinctive gesture stands out and remains unforgettable in the memory of the spectator towards the end of the documentary. Among the people disappointed about the election results, Marìa Barhoum intercepts a lady who barely keeps herself from crying. The interviewer, that until that moment had remained calm, quiet and exposed her political thought without exposing herself, breaks her role of reporter hugging and kissing the woman. From an impartial voice she becomes an emotional character, totally involved in the historical event. Answering the questions after the screening of the documentary, Kristina Konrad, reveals that her disappointment with the elections result was so big that she set aside metres and metres of film for many years. A discouragement readable in the last interviews of the movie.

Despite the amount of minutes, Unas preguntas is a documentary that pleasantly flows and makes the world discover one of the most feverish moments of the new Uruguayan democracy, in a simple and deep way. Its greatest quality lies in showing the desire to possess and exercise the free thought and the free action. Maybe it is also that light heart  with which young people approach the camera, impatient of showing themselves, laughing and joking, even if out of tune with the social and political discourses of the interviewees; like those little girls who smile and play, unaware that in front of them there are the victims of the military government that clipped the nation’s wings of freedom. Those light-hearted smiles tell us about peace, even though it is driven by childish naiveness.