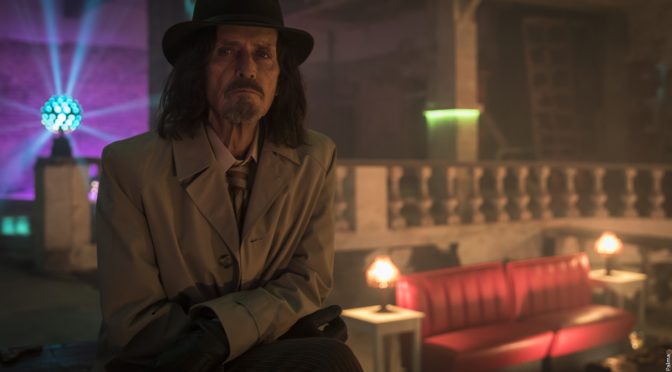 The title Dreamland perfectly captures the essence of Bruce McDonald’s latest film, as it revolves around the fundamentals and the basic logic of the dream world. From the very first scenes, the audience gets lost in a daydream in which the two main characters end up being caught in criminal activities. A kind-hearted hitman and a drug-addicted jazz musician, both played by the talented Stephen McHattie, have also a strong connection that causes them visions of their possible future  or a remote past that involves them both. The plot becomes more and more complex as the film goes on, introducing a variety of stone-cold and grotesque characters that results comical at times.

Dreamland is a deeply surreal film, almost psychedelic, that constantly stimulates the audience to reflect on the film and encourages them to piece together the story as a whole. The  thoughtful yet frantic use of a fast-paced montage gets in the way of grasping the meaning fully; without any time and space references, present, past and future merge together endlessly. No right answers are given but dreams are often inexplicable too, hence these stylistic choices effectively convey the elusive features of the story.

McDonald’s movie is built around many genres. It is studded with a great number of references, from quoting crime and horror movies to modern action films, in which violence is portrayed in a very graphic and explicit way. The final result is a surreal pastiche that combines together fact and fiction, tradition and innovation to the sound of jazz music. The experimental feature of the movie is key since the different story genres allow the director to give classic film a new and unexpected twist.

A minor character’s line, “we are in a different world” lies at the heart of the movie. Dreams are very conceptual and out of reach, yet so real. They represent the part that interacts more with fantasy and creativity, taking people’s minds towards unknown lands.