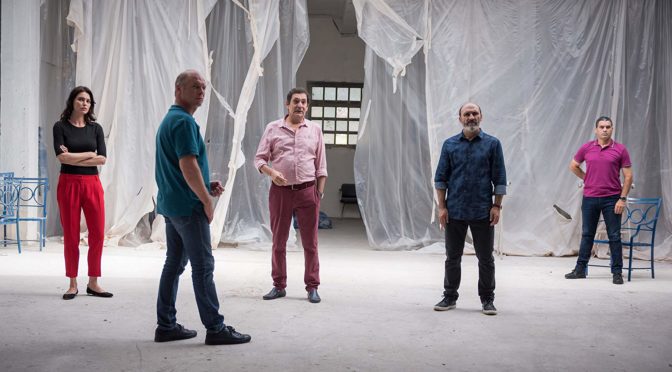 Film critics in Cannes have branded it as a childish play, a bundle of tangles or a formal experiment which has failed the expectations. On the other hand, the crowd of the enthusiasts present at the display is quiet and has praised it as much as its detractors have booed it. The new movie made by the Romanian director is actually a bundle of tangles: a postmodern but not a pimped one.

“Postmodern” is quite an over-used label, but it is useful to contain all these artistic potpourries in which anything is contained: loads of quotes, an unstable timeline of the story, an apposition of several and different music genres as well as the movie genres employed. As everybody was wondering after going out of the movie hall, “What have we just seen?”. A bit of comedy, a bit of noir, a bit of crime: a mixture of many styles and genres. I do not know, exactly. What we know for sure is, anyway, that Corneliu Porumboiu had a very clear idea: a theory of his own, and the need of explaining it easily by entertaining the audience. But, first things first.

La Gomera begins with a very serious climax. A bald, very nervous and dazed man is on screen (his name is Cristi, played by Vladimir Ivanov). On the reverse shot, La Gomera, a minor island of the Canaries. A dry and sunburnt land in opposition to the man’s face, that is darkened of shadow. As the movie soon reveals, the island is the hideout of an international criminal organization and the preferred location for the trafficking which is the central point of the whole plot. That very few people are now able to tell the plot-twists of the story is not that bad, because what we really need to understand is that theory, which is also our only certain point.

According to this theory, there is a problem in the communication, especially the verbal one. For Porumboiu, the language is an obsession, as he has stated many times during the Turin Film Festival press conference. But how can we apply this theory to such a dialogic art of this film? Because of the importance and the feeling of boredom that the very concepts of the movie try to convey (how boring is cinema engagé!), it is very hard to put it all in the storytelling. Putting it easy: it is very hard to entertain by saying something of such an importance. This is why the director has cunningly decided to employ the Gomerish pre-verbal native language, which is entirely composed of whistles. Hence, the dark man lands on the island to learn the Siblo (this is the name of the language), under the guidance of a member of the criminal organization. The one who is heating up the scene is the iconic figure of Gilda (played by Catrinel Marlon). Love will break out, and nothing will be the same again. Although the other criminals try to stop them, the femme fatale and his not-that-handsome lover will overcome the odds in a world that communites with a language they do not want to speak, insisting on interacting with each other with Siblo, the earnest language of love and paradise.

A work of art which is meaningful, fun, international, sincere. A work of art which is original. A work of art which is postmodern, as said at the beginning, because it is such a mess. As Poromboiu had explained at the press conference, all of his choices that I am labeling as “postmodern” – the cinematic quotes (like the name of the main character itself) or the several music genres – aim to depict the personalities of the character, as well as their evolutions. We won’t go into that shot/countershot, given that there will be more throughout the movie: and every time, Cristi’s gaze shows us, in countershot, his soul and his emotions. I could not say the same for the music, that was – we can frankly say – randomly inserted. The owner of the hostel in which some of the main characters stay, says that he listens to classical music at full volume to “educate the clients”. In my less condescending opinion, the Romanian director would have reached at least one objective: my own appreciation. Instead, La Gomera is a very bizarre movie, with a beautiful story based on a very cunning idea (from the abstract to the practical features). A terrific movie, but also a little obvious or predictabile.

Nonetheless, maybe because of its closeness to the problems of communication (considered as a linguistic trap, with the words of Wittgenstein), or whatever it is the reason: to the writer of this commentary, La Gomera is one of the highest points of the current season. In this human, or maybe too human ages we are living, every try to dehumanize men and their logical reason must be praised and encouraged for more. What is certain is that, in order to learn the language of nature, the one of paradise and love, you have to swim a lot and not in the pool, but in the ocean, like Gilda said. So please, while whistling, let us swim.