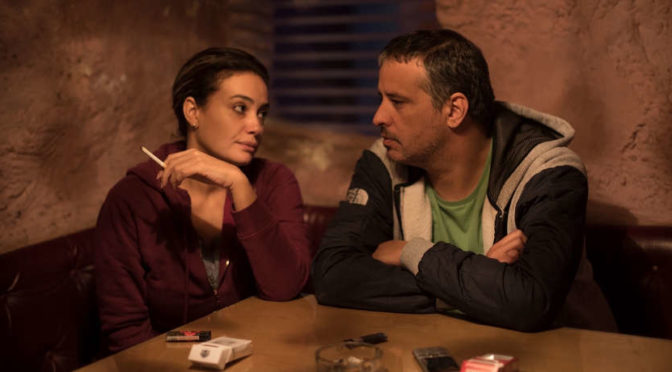 Noura (Hend Sabri) dreams of finalizing the divorce proceedings as soon as possible to be able to live with her lover Lassaad (Hakim Boumsaoudi) at last. Her life has not been easy so far; her husband is in jail and she has had to raise her three kids alone while trying to keep a roof over their heads by working in a hospital’s laundry room. Nevertheless, she is happy, she has managed to emancipate and find her own balance. However, when Jemal (Lotfi Abdelli) is unexpectedly released from jail, he comes back abruptly in her life, upsetting her balance.

Upon his return home, he seems to demolish everything Noura has struggled to build until this moment. He decides to rearrange the apartment furniture; he disrupts the family routine and imposes his own rhythms, his illegal methods to meet the costs, his sexual needs on his wife, who’s reluctant if not disgusted by his presence. Despite the revulsion she feels, Noura has to constantly deal with him, not only at home but also at her workplace, and he is also a recurring topic in the conversations with Lassaad. Their fear of being discovered, as a matter of fact, has to do more with the violent nature of Jemal rather than the unfair Tunisian law, which considers adultery an offence, punishable by up to five years of jail.

Noura is helpless, she is forced to endure the events without being able to control them; and she ends up being a submissive wife. She shows the first sign of submission when, after her husband’s return, she is pictured in the bathroom removing nail polish, after being scolded by Jemal when he had seen her wearing it in prison. She also takes her eye makeup off, as a way of protecting herself, even though by doing it, she is abasing herself. It might seem something of little value, but it hides a deeper meaning. In this context, self-care is a symbol of self-affirmation, which goes beyond the mother, wife and lover’s role. She feels the need to stand her ground as a woman and as a person.

As far as the aesthetic is concerned, the director uses the camera in a specific way: all the characters are shot up close, she invades their personal space, almost chasing them. This stylistic feature is implemented in order to make the audience feel part of the tragic events that unfold and shape the lives of the characters. The closeups are intended to read their minds. The camera moves away only when portraying the unspeakable scenes of domestic violence and male rape. These sensitive issues happen offscreen, this choice might make the scenes less graphic, however, it ends up amplifying them with the power of suggestion.