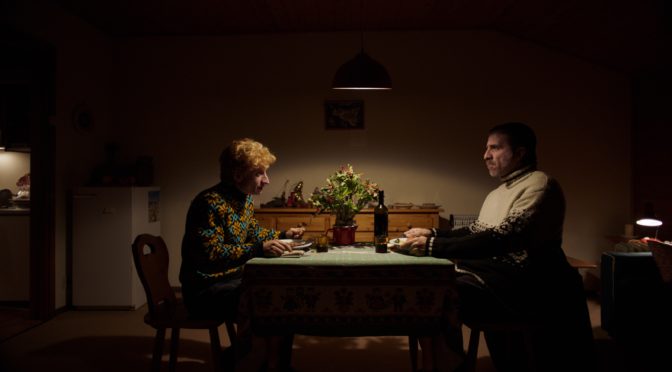 Calogero (Vincenzo Nemolato) is a young Sicilian man who wanted to do the right thing for himself, for her companion and for his still unborn daughter Marcella. This is the reason why Calogero denounced the killer that had once shot two men right in front of his granita cart. And this is the reason why he ended up in Trentino, in a tiny forgotten village, living in a guesthouse called Paradise.

His life is now boring. Meanwhile, his daughter is born, but he is forbidden from contacting his girlfriend. The mountain village where he is forced to live is not interested in granitas, and Calogero feels like a fish out of water. One day he joins a group of folk dancers led by the local priest (Branko Završan). At that very moment, during rehearsals, Colagero sees him across the window. The man who had pulled the trigger in front of him has found him, since Calogero is an inconvenient witness…

Paradise – Una nuova vita, Davide Del Degan’s new film, begins in such circumstances. A thriller that shortly turns into a disorienting black comedy, in which every snap decision is followed by a total unexpected reaction. A story that leads the main character to a deep inner conflict, that compels him to choose between his old life and his future life; between Lucia (Selene Caramazza), who still lives in Sicily with Marcella, and Klaudia (Katarina Čas), who is his only solace in the Dolomiti’s desolation; between the easy path and the right path.

As Davide Del Degan and Andrea Magnani uphold during the press conference, Paradise – Una nuova vita is not simply a comedy whose purpose is to chronicle the tragic events that an eyewitness has to face. It’s an intimate film about the adversities of two men who are far apart, but every day a little closer. But, most of all, it’s a film about the willingness and the possibility to improve our life. It’s a tale that shows how to deal with changes, whether imposed or wanted, and how to treat ourselves with a new chance. The relationship between Calogero and the killer develops into the blending of two human beings, the first split in half and the other looking for something that helps him to forget and go ahead. A quite light tale to illustrate that, even in the darkest places, everyone can turn the tables.