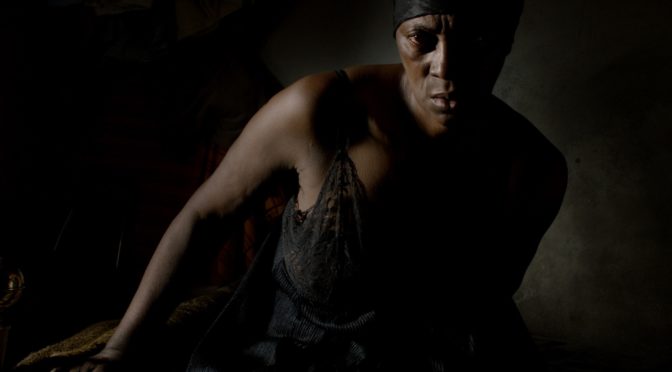 Creatures that move around in the darkness, some limping, others standing on their feet. Creatures that live in some sort of ruins of an ancient city. Creatures that don’t talk, they just act, like animals. Creatures that, once they are pierced through by the dim light that comes from cracks, finally appear to us for what they are: human beings, mostly men.

But the protagonist of the new feature film by Pedro Costa can’t be found among them: she comes from far away and glides in the reality just described. A reality that, even if it echoes an horror atmosphere, actually reflects our present time: it’s the devastated neighborhood of Fotainhas, in Lisbon, mostly inhabited by Cape Verdeans immigrants. And also the protagonist, Vitalina Varela, is from Cape Verde. The character and the actress who performs it share the same name and story: she is 55 years old and came to Lisbon to give her final farewell to Joachim, her husband who immigrated to Portugal 25 years before. But the man was buried three days before the arrival of his wife, and Vitalina, too poor to afford the return ticket, has no other choice but to stay in the crumbling house of Joachim in Fontainhas. And here the ghosts of the past will come to visit her.

The themes touched by Costa in his film are many: love and its destructive mechanisms, poverty full of disenchantment and incommunicability; the gradual disappearing of faith. And in the midst of this storm there is Vitalina, figura Christi and new Antigone. Everyone but an old man and a devoted priest is against her while she is trying to bring back peace to the neighborhood. And to do that she will have to make the biggest of sacrifices: to forgive Joachim, the man who abandoned her alone in their house on the mountains of Cape Verde; the man who forced her to face a life of hard labor and misery; the man who betrayed her with many women, ending up falling in love with one that ironically carried her own name. But Vitalina will later understand that, in her own words, “without love nothing works”. Therefore, with the help of the priest, she exhumes the corpse of her husband from the forest where it was abandoned and gives him a proper burial in a cemetery, earning herself the respect of the people of Fontainhas.

The parabole of Vitalina Varela is a good portrayal of love and rage, of hate and understanding, of sorrow and forgiveness. Its style is essential: from the script, made of a few but powerful lines, to the direction, characterized by static shots and a Caravaggesque cinematography. A film that reminds us that taking a step back, even after a long time, and looking at the most painful experiences of our life in a new light can be very cathartic.