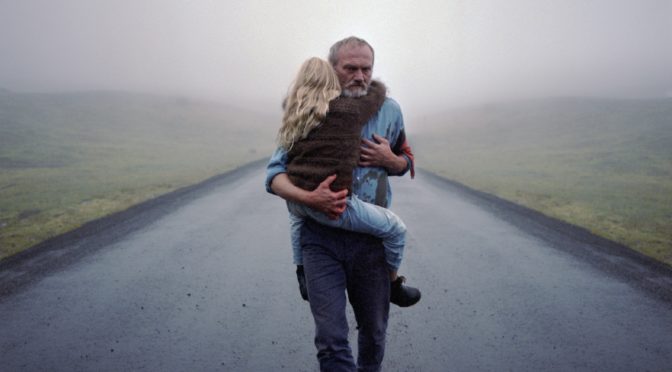 A white, white day is about a day which is as white as snow and Icelandic fog, as black as a film noir, and as red as blood. The death of Ingimundur’s wife is the trigger point for a series of events. Ingimundur (Ingvar Sigurdsson) is a cop who lives and works in a small village in Iceland, far away from everything and everyone. He hides his pain but at the same time he tries to manage and overcome it.

A white, white day is about a quiet day, a quiet man, and a house under construction. Ingimunder’s pain is out of control. It suddenly explodes and destroys everything – the place where he stays, his relationships with his coworkers, his job, his relationship with his grandchild Salka (Ída Mekkín Hlynsdóttir), who she looks upon him as a father. Igimunder’s world explodes since he is incapable of managing his sorrow.

The movie revolves around this intense moment by focusing on the drama in a few scenes. The film reaches its climax with no strong foundations. What is the matter with the main character? Is it his house that constantly changes (some long shots show how the house keeps changing day by day, season after season)? Is it the impossible mourning? Is it the dullness of life in a godforsaken place? No question seems to be more important than others, in the first part of the movie. Indeed, there are too many unanswered questions.

It is only later that anger makes sense, when it is explained and understood. Ingimundur’s anger is linked to a secret and to the impossibility of facing the pain and its cause.

A white, white day has a slow rhythm, cold colors in photography, and a distant point of view in terms of direction. There are neither unnecessary cuts nor spectacularity, but there are some long shots which have a specific purpose – to build suspense. In this sense, the audience keep asking themselves what they are waiting for since they constantly fumble around in the dark – which may also seem an oxymoron if compared to the title of the movie.